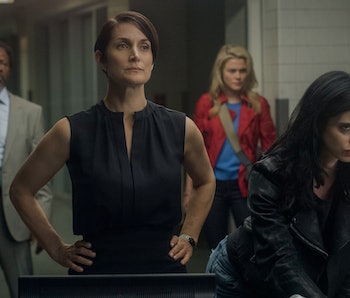 What do Freaks and Geeks, Twin Peaks, The West Wing, ER, Weeds, House, The Good Wife, True Blood, Mad Men, The Newsroom, The Walking Dead, The Leftovers, and Homeland have in common? They’ve all had episodes directed by Lesli Linka Glatter. With a resume like that, how come she’s not a household name?

Peter Jackson and Lexi Alexander made headlines this week in relation to their upcoming directing gigs. Both are skilled storytellers in their field, yes, but that’s not the main reason for the hurrah — it’s the fan-favorite shows themselves that make their involvement interesting. Jackson is attached to helm an episode of Doctor Who, and Alexander is lensing an episode of Supergirl. It’s an exciting prospect to have two very distinct visual styles entering the lore of two major genre series, but does any of that make a difference when audiences are willing to tune in no matter who yells cut?

TV show directors take on a different set of tasks than those working in movies. Showrunners, not directors, are the ones hired to make sure a season runs smoothly — they oversee scheduling, scripts, casting, and story planning, and sometimes write and direct an episode or two themselves. Directors are brought in later. HBO announced five directors for the upcoming season of Game of Thrones back in June. Most series do this for two reasons: fatigue and variety. The pressures of staying sharp for a season’s worth of material is taken out of the equation, and the show itself remains fresh each week.

It’s understandable then, that the success of a television show is often credited to its showrunner. Much of the plaudits for Jessica Jones have been awarded to Melissa Rosenberg, the series’ creator, showrunner, and occasional writer. Her steely commitment to making the show a unique mediation on superhero ennui deserves massive celebration. But she doesn’t direct a single episode. She hired a range of well-respected talent to kick out the Jessie jams. The relationship between both a showrunner and her directors is a tough one, as Showtime’s Head of Programming points out in Variety’s piece on TV diversity:

“The directing position is a tricky position,” Gary Levine explains, “because on the one hand, you hire a director because of their filmmaking abilities and their vision and their talent. And on the other hand, that director needs to realize the vision of the showrunner. So it’s a very delicate dance, where the director is [two things]. You want a visionary and you want someone to service the vision of another.”

Jessica Jones helps illustrate why TV directors are relevant to the process of serial storytelling. “AKA Sin Bin”, the episode where Jessica captures Kilgrave in the hermetically-sealed chamber, was directed by John Dahl, the man who lured a chilly sociopath from Linda Fiorentino in The Last Seduction, and it’s no accident that he was hired to lens one of Jessica’s most unnerving episodes. His fingerprints are all over it. Jessica’s desire to catch Kilgrave in a lie. Kilgrave’s desire to stay in control. They’re both signifiers of his style. His visual signature cultivated from years of simmering noir, the finishing touch. The rest of the season brought in eight different directors whose own stylistic proclivities were suited for the story. It worked. This choice mirrors one regularly made in cinema; film franchises often switch out directors between sequels.

True Detective and The Knick further prove the importance of a strong directorial vision. They take on a different tack by keeping one visionary at the helm throughout a whole season. Cary Fukunaga for True Detective’s first season, and Steven Soderbergh on The Knick. The fact that a showrunner might choose to enlist several directors or just one for a season is telling enough: that choice matters.

Picture some of the most iconic moments in recent television history. Walt’s collapse in Breaking Bad as the enormity of Hank’s death washes over him, his crumbling face filling the screen. Rian Johnson made that happen. Don’s quasi-enlightened face in Mad Men’s final shot. Orchestrated by Matthew Weiner. Carrie and Brody’s terse interrogation in Homeland. Lesli Linka Glatter totally nailed that. A sun-dappled Tony Soprano wanders the Nevada desert, high as a kite. Alan Taylor. Even if you don’t know their names, you probably know their work.