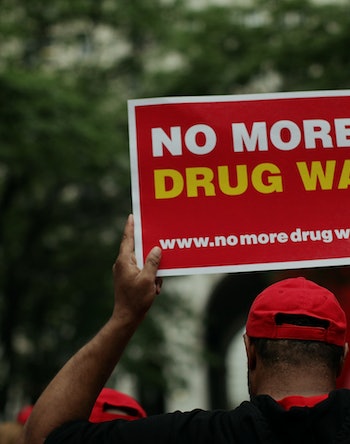 Partially just to be argumentative, my 18-year-old self used to bust out this quip whenever the war on drugs got brought up: “All drugs should be legalized.” I’m not entirely sure I believed it; I was mostly just interested in a reply. But, now that I’m older and not a whole lot wiser, I’m starting to believe my contrarian, know-it-all college-freshman self. In the wake of several states legalizing marijuana amid an ever-flaccid drug war, the best argument for saying to hell with it and legalizing all illicit substances boils down to this: It can’t get any worse than it is now.

Portugal vs. the Man

The most cogent argument I’ve heard against legalizing all drugs — yeah, we’re talking heroin, coke, uppers, downers, and whatever Gatorade-colored crank some kid is inventing in a Montana basement right now — is that it would encourage more usage. I always said, “If heroin were legal, would you run out and shoot up?” Well, maybe, but just at first.

In 2001, Portugal decriminalized all drugs. From Policy.Mic:

If someone is found in the possession of less than a 10-day supply of anything from marijuana to heroin, he or she is sent to a three-person Commission for the Dissuasion of Drug Addiction, typically made up of a lawyer, a doctor, and a social worker. The commission recommends treatment or a minor fine; otherwise, the person is sent off without any penalty. A vast majority of the time, there is no penalty.

The results? Usage went up shortly and then shot down. H.I.V. deaths plunged. Overdose deaths are lower in Portugal than almost anywhere else. As the architect of the law, Dr. João Castel-Branco Goulão, says, “Treating drug users as people who are sick, rather than as criminals, resonated with Portuguese society, because the phenomenon cut across all sectors.” In short, the policy is working and Portugal hasn’t devolved into a giant version of Hunter S. Thompson’s briefcase.

The United States isn’t Portugal, that’s true. But, in many ways, we’re worse off. We have a massive incarceration problem here. By most estimates, we sit at around 2.4 million people locked up — the vast majority for nonviolent drug offenses. The U.S. incarcerates about 716 people out of every 100,000 while the rest of the world averages 155. Those staggering numbers lead to more: The United States accounts for only about 5 percent of the earth’s population but 25 percent of its prisoners. Throw in systemic racial prejudice and you’ve got yourself one ginormous shit sandwich.

If drugs are legal, guess what? Less prisoners! And the money being spent on incarceration — an average of $31,286 per prisoner per year — could be spent on rehabilitation programs. Oh, and how about that pesky war on drugs? We’re at about $38 billion spent, federally and locally, so far this year. Holy shit. Rehab, better schools, cleaner drugs: We need all of it, now.

Want to talk more money? If the federal government harvested, manufactured, supplied, and taxed drugs, it would make bank. Like, the kind of bank Rick Ross raps about. We’re probably talking into the hundreds of billions of dollars earned. (This guy says $85 billion, but that estimate just takes into account taxation.) Colorado alone made $70 million last year on legalized weed, and that was just tax revenue. Perhaps most importantly, it would paralyze international drug cartels. If your cocaine is purer, cheaper, and safer from the U.S. government — and you cut out having to give back-alley handjobs — you’re gonna buy from ‘em every time.

Regulating and purifying drugs and needles while rehabbing drug users would also cut down on overdose deaths. If you haven’t heard, we’re in the midst of a major upswing in heroin usage, and thousands of people are dying from whack drugs. If you want to ruin your day, I highly recommend this 60 Minutes report.

People are going to do what they want. They’re going to find drugs, whether they’re legal or not. Alcohol prohibition didn’t work, so we ended it. Marijuana prohibition isn’t working, so we’re ending it. It logically follows that all manner of drugs should be at least decriminalized and addicted users should be treated. Holy shit: I was right about something when I was 18.

So You’re Saying There’s a Chance?

There are policy groups, lobbyists, and organizations advocating for an end to drug prohibition. Foremost among them is the Drug Policy Alliance, which is pushing for decriminalization, or what I’d call the Portuguese Model. In a note, deputy executive director of programs, Stephen Gutwillig, tells me, “We advocate ending the criminalization of drug use and possession outright, and for creating legal, health-centered avenues for determined drug users to access their drug of choice (both of which are different from full legalization).”

Unfortunately, far more powerful are the lobbies for the drug companies we’ve come to accept — the Pfizers and Mercks — as well as the corporations which profit from the prison system. If I sound like a hippie socialist, here, then good: Our society needs to get busy — quickly — questioning the architecture of this system.

Any kind of legislation is far off. Bernie Sanders has filed a bill to decriminalize marijuana and even though Donald Trump used to advocate for an end to the war on drugs, no major presidential candidate is pushing for serious reforms across the drug spectrum. And, no wonder: It’s far from popular. Only about 10 percent of Americans think coke, crack, and heroin should be legalized (versus the 58 percent who favor legal pot).

So, again, we’re left with changing attitudes. Perhaps the best way to talk about a touchy subject such as this is semantics: “decriminalization” and “rehabilitation” instead of “legalization.” We’re not just discussing getting high at the club, here, but are considering lives lost to death, addiction, and imprisonment. And even though many families are affected by drug use, a healthy dose of Millian utilitarianism comes in handy, here, too: Why not just let people do what they want to do? Think about that the next time you’re pouring a Scotch, smoking a joint, popping a Xanax, or even eating a Big Mac. To each his own, and let’s tax the hell out of it.