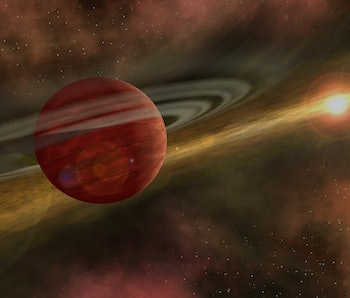 When you first move into a star system, you want to perch up in a spot you think will work out well enough for the next several billion years. Too far away, and you’ll be dealing with a perpetual ice age. Too close, and you’ll spend your days roasting like a worm on pavement in the summer. The best planetary real estate exists within what’s called the “habitable zone” — the portion of the star’s orbit that’s warm enough to sustain life, but far away enough to keep cool.

Sometimes, if you’re lucky enough like Earth, you can find a premium spot and spend all the time you need slowly modeling organic molecules into primitive life, finally culminating in intelligent life forms who are able to send people to the moon and make great arguments for why Creed is the year’s best film.

You might work hard to make those plans. But that doesn’t mean the universe is going to be on your side. Case in point: The star HD 106906, located 300 lightyears away, is just 13 million years old — an infant by the universe’s standards — and its still unnamed planetary system is still a young mess.

The planet is a gargantuan 11 times the size of Jupiter, and about 16 times the distance to its host star than Pluto is to the sun.

When a star system is initially forming, a swirling hell of dust begins to encircle the main star, and that dust starts to accrete into solid objects like planets and moons.

“Every planetary system has something like this,” says Paul Kalas, an astronomer at the University of California, Berkeley and the lead researcher of a new exoplanet study. “When you look at their structure, you may be able to understand the geometry of the architecture of the planetary structure.”

HD 106906b is too big to have accreted so much matter from its current residence in HD 106906’s suburbs. It had to have been much closer — perhaps even in the habitable zone. But then how did it get banished to such a far away place?

Kalas and his colleagues, who presented their findings Tuesday at the Extreme Solar Systems III conference in Waikoloa Beach, Hawaii, say new data gathered by the Gemini Planet Imager in the Chilean Andes and the Hubble Space Telescope illustrates a lopsided comet belt in the star system. At some point, the star system was severely disturbed by some sort of gravitational anomaly, which probably resulted in the planet getting thrown out into the distance.

One theory Kalas mentioned at a news briefing today was that a nearby moving star could have conducted something of a “stellar flyby,” creating a disturbance as it neared the system and throwing everything into chaos, causing the planet’s unusual orientation and distance.

That theory or others can’t be confirmed without a lot more data. Still, the findings are tremendously exciting.

“It’s thought that early in the evolution of our own solar system, about four billion years ago, our own planetary system had a violent rearrangement before settling into its currently stable configuration,” said Kalas.

He’s hopeful that understanding this distant star system could shed light on how our solar system formed, and what needed to go right for the Earth to take shape and hold on to its prime real estate, some 92 million miles from the sun.

Lisa Kaltenegger, an astronomer and exoplanet researcher at Cornell University who was not involved with the study, thinks this study highlights the “oddball” science involved in figuring out how planetary systems form. The findings help us “see the first steps,” but leave open the question of how these accretion disks lead to bodies like planets.

Though HD 106906b is probably too large to have been home to life, learning more about it can help inform us how smaller, potentially life-bearing planets can sustain life.

More like this
Science
Sep. 24, 2022
Is a fact always true? A philosopher explains how to spot the difference
By Peter Vickers and The Conversation
Science
1 hour ago
Behold! 9 glorious Neptune images reveal our changing view of the planet
By Jennifer Walter
Science
Sep. 12, 2022
A private mission wants to find alien life on the Solar System's most unrelenting planet
By Jeff Nagle
Related Tags
Share: