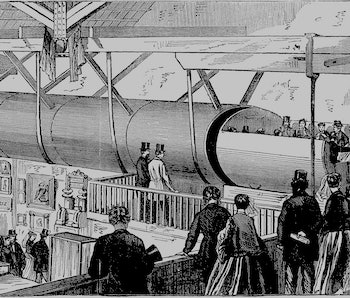 The future of mass transportation is going to be fast, clean, and maybe impossible. Funny, because if you look back through history, thus it has ever been. Since we’ve figured out how to raise a sail or paddle a canoe, humans have tried to devise fantastic ways to cross the most space in the least time. These designs look absurd now, but who knows, some of these could still wind up being the future.

Pneumatic tube transportation — propulsion accomplished through a combination of vacuum tubes and pressurized air — has been widely used for package delivery for a century and a half. Even today you can still find pneumatic delivery systems in banks, hospitals, and municipal buildings.

Believe it or not, pneumatic mass transit for humans has always been an eyelash away from becoming a reality. In the 1850s, London Pneumatic Despatch built a tube large enough for transporting a small handfuls of people. Around the same time, an American inventor named Alfred Ely Beach designed a functioning luxury pneumatic tube prototype in New York. In the late 1960s, Lockheed engineers proposed a pneumatic tube system for San Francisco’s BART system.

The main opponent to human potato cannon transport has always been physics itself: the amount of power needed to create a vacuum strong enough to propel a subway train is hugely inefficient, and of course there was the problem of reliable braking. However, with advances in electro-magnetic technology, the proposed Hyperloop, Elon Musk’s updated vision of pneumatic transit systems turned into a reality.

Half airplane, half hydrofoil, the Russian ekranoplan ground effect design has its roots in the very beginnings of aviation: pilots realized very early on that aircraft operated much more efficiently close to runway surfaces. As opposed to full-on flight, the ekranoplans exploit that principal by creating just enough lift to fly a few meters above the top of the water’s surface.

The lack of friction meant that not only would a ekranoplan travel faster than a ship, but, because huge amounts of lift can be generated so close to the water’s surface, you could theoretically keep a vehicle several times larger than a 747 in the air. The Russians actually secretly built a fleet of these bad boys during the Cold War for military purposes like troop transports and even as rapid-deploy rocket launchers.

So where are our deluxe ekranoplan ferries already? Well as it turns out, while they were super fast in a straight line, steering was a bit of an issue. Plus ekranoplans of any size really don’t like wind and choppy water, which makes them unsuitable for ocean travel. Even the smaller military versions deployed in the Black and Baltic seas had a really nasty habit of sinking under fairly mild conditions.

For about a 20-year period in the 1920s and 1930s, gas-filled airships like blimps and zeppelins were considered to be the future of aviation transport. Believe it or not, planes were considered too inefficient and unreliable for mass transit, while helium or hydrogen filled airships were seen as steam liners of the sky. Of course as history proved, when things went wrong on an airship full of literally tons of flammable gas, they went really, really wrong.

However, while the crash of the Hindenburg derailed dirigible dreams, they didn’t die completely. Companies like MobyAir and Areos envision a resurgence of safer, more efficient [airships] (http://www.popsci.com/aeros/article/2006-02/flying-luxury-hotel) — literally luxury hotels in the sky — capable of transporting thousands of people on transatlantic air cruises.

Looking for the ultimate in green technology? To hell with fossil fuels, let’s harness the power of endangered sea mammal exploitation. Tie a pressurized passenger car to a fucking sperm whale, hire a couple of chaps in deep-sea gear to steer, and watch the magic happen. I mean, if a horse or an ox can tow a buggy why not a whale, amirite?

Man, your great-grandparents were kinda assholes.

Ever wish your commute home was less stop and go and more like the world’s most terrifying amusement park ride? The TransDrive Suspended Travel Automation system had you covered. Simply roll up to the docking station, enter your destination, and hook your car onto an overhead rail capable of hurling your vehicle up to 65 miles an hour while suspended 80 feet in the air. Even in the pre-Google world of self-drive commute theory, this had to be seen as a horrible idea…or maybe the most awesome idea EVER.