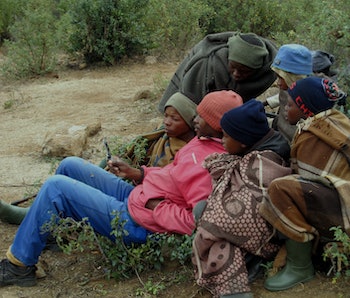 To help the needy, you have to know where they are. But, in many developing countries, demographic and even geographic information is unavailable or significantly out of date. In Africa, national statistics on economic production are frequently off by as much as 50 percent. The known unknowns are innumerable and give life to unknown unknowns.

Big data collected from mobile phones may be able to change all that. In a new study published in Science, researchers took data from individual cell phone user’s calls from a Rwandan database containing billions of call interactions, and combined that information with a phone survey about basic welfare indicators to 850 individuals. From there, they were able to develop a highly-accurate model that maps poverty and wealth throughout Rwanda.

“We focused on understanding how the digital footprints of a single individual can be used to accurately predict that same individual’s socioeconomic characteristics,” wrote the researchers, who are affiliated with the University of Washington and the University of California, Berkeley. “The predicted attributes of millions of individuals can, in turn, accurately reconstruct the distribution of wealth of an entire nation.”

According to the researchers, mobile phone data reveals a lot more than when someone makes a call. When they analyzed the call records of more than one billion people, they could determine the “intricate structure” of the individual’s social network, their patterns of travel and location choice, and their history of consumption and expenditure — all indicators of socioeconomic status.

Because the scarcity of reliable quantitate data is such a problem for the governments of developing nations, the researchers hope this specific model will help Rwandan policy-makers make more accurate decisions about resource allocation and will provide a foundation for “the study of inequality and the determinants of economic growth.” It’s a lot less expensive than previous methods of data-collection: A typical national household survey costs about $1 million and takes about 18 months to complete. The metadata analyzation and phone survey cost the researchers $12,000 and took four weeks to administer.

The researchers behind this study say that the biggest challenge for their model will be implementing it with the consent of mobile phone commercial operators and addressing whatever privacy concerns come up with for the mobile phone users. But if it flourishes in other developing countries, the model could aide with real-time policy evaluation, monitor populations in inaccessible regions, and help target resources to those who need help most.

More like this
Science
Sep. 24, 2022
Is a fact always true? A philosopher explains how to spot the difference
By Peter Vickers and The Conversation
Innovation
Sep. 22, 2022
Trash can-sized robots could revolutionize how you travel — but there's a catch
By Molly Glick
Innovation
Sep. 26, 2022
This sound-powered underwater camera could reveal deep-ocean secrets
By Molly Glick
Related Tags
Share: