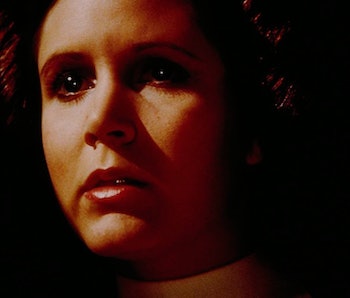 Carrie Fisher, in a Tuesday interview with Time magazine, admitted that playing Leia Organa—the character long-known as Princess Leia, but has been promoted to “General Leia” for the upcoming Star Wars: The Force Awakens—is something she accepts as a part of her career.

“I’m a female and in Hollywood it’s difficult to get work after 30—maybe it’s getting to be 40 now,” she tells Time, “I long ago accepted that I am Princess Leia. I have that as a large part of the association with my identity. There wasn’t a lot of hesitation.”

When asked if she missed making Star Wars movies, she said she didn’t: “They were fun to make…like playing on a jungle gym. They’re not fun like that because there’s early calls and, as you get older, there are memory issues and pressure with that.”

For the many diehard fans of the Star Wars cinematic saga, it’s interesting to note Fisher isn’t the first original participant to suggest making the movies isn’t always a dream come true—an experience recently shared by Star Wars creator George Lucas, who claimed that, “You go to make a movie, and all you get is criticized… it’s not much fun…You can’t do anything…you have to do it a certain way. I don’t like that. I never did.”

Mark Hamill has also expressed a conflicted sensation in returning to his role as Luke Skywalker—although he seemed more concerned of being vilified than anything else. “”The truth of the matter is, I was in a state of shock. I thought, ‘How could this be?’ I couldn’t say yes or no, but what was really interesting was later I thought, ‘It’s not like a choice, it’s like … it was like I was drafted,’” he explained at an April “Star Wars Celebration” event, adding, “Can you imagine if for some reason I said, ‘I don’t think I want to do it’? I would have all of you surrounding my house like villagers in a Frankenstein picture…I’d sort of be like the most hated person in fandom.”

As for Harrison Ford, he had been sharing anti-Star Wars sentiments as far back as the promotion tour for 1983’s Return of the Jedi, where at one point (as per the Huffington Post), Ford had been quoted as saying “Three (films) is enough for me. I was glad to see that costume for the last time.” The actor had also tried to get George Lucas to kill off Han Solo during Jedi.

However, during a July Comic-Con, Vulture reports Ford, when asked how it felt to return as Han Solo, replied, “It should have felt ridiculous!” but continued, “I will tell you that it felt great…I was proud and grateful to once again be involved.”