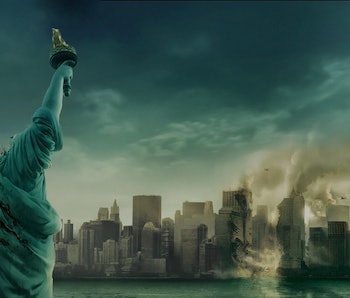 In less than thirty days J.J. Abrams will unleash Star Wars: The Force Awakens, the newest installment of the most lucrative and globally-recognized franchise in the world.

But in the summer of 2007, the man behind Lost revealed his newest project: Cloverfield, a small movie in a niche horror genre. Crucial details (like a title) were locked away in Abrams’ obnoxious mystery box, and his restraint to tell more broke my sanity.

Cloverfield wasn’t a small movie by any definition. The project was financed by Paramount with a $25 million budget, commanded extensive special effects, and its then-unknown cast had future prestige TV actors like T.J. Miller (Silicon Valley), Lizzy Caplan (Masters of Sex), and Ben Feldman (Mad Men). The studio hosted a party in its honor at Comic-Con. The buzz surrounding it hit the internet and news cycles and Best Week segments on VH1.

But Cloverfield was dirty. Dingy. It wasn’t polished like Abrams’ next movies Star Trek and Super 8. No matter how much attention the world gave to the speculation, it felt underground.

The first trailer to Cloverfield was attached to Transformers without a title, so imaginations ran amok. Its association with Michael Bay’s capitalist salute to nostalgia and the obvious hints that a monster was loose in New York presumed J.J.’s new production would be a Voltron, Thundercats, or more obviously, Godzilla. The few lines of dialogue were picked apart (“Rob, have fun in Japan!” and “I saw it, it’s alive, it’s huge!”), copyright ownership of old cartoon properties were dug up, sounds of the monster’s roar were analyzed through filters, and MySpace pages of the film’s characters (started by the film’s marketing department) were poked and prodded for info. YouTube was populated with new videos every day with people crowdsourcing whatever they could find.

A viral Flash game, Ethan Haas Was Right, was swept up in the storm. With ominous music and a destroyed city, the game was presumed to be involved with Cloverfield. Fans banded together to solve the puzzles and analyze every cranny of the dark, lo-fi videos of a man in a doomsday bunker talking about the end of days. Ethan Haas wound up having nothing to do with Cloverfield — it was for a role-playing game, Alpha and Omega: The Beginning and the End from Mind Storm Labs — but for a few weeks, movie geeks had turned into code breakers and conspiracy theorists.

I was supposed to be on vacation. But there I sat in my aunt’s apartment in New York rudely borrowing her laptop.

It had been a week since I saw the trailer and I felt like a shut-in analyzing Roswell, stumbling upon things I wasn’t supposed to know even though Paramount’s marketing wanted me to. I tried to explore where Rob supposedly lived (and to my dismay I learned those promos were filmed in LA — that’s when the imagination began to crumble).

As quick as the fever settled in, J.J. Abrams doused the fires. He went up on stage at Comic-Con in 2007 and answered a load of the questions we had within two minutes. Suddenly, it was over.

By November of 2008, more polished trailers hit the web and speculation ceased. The YouTubers and puzzle solvers disappeared. When the posters were plastered on bus stops and billboards, it didn’t feel like a secret anymore. It wasn’t mine, or anyone’s, even though it never was.

Cloverfield was finally released on January 18, 2008, and came and went without much ado.

The film itself did leave a legacy. Monster movies were introduced to a modern generation that would later enjoy Pacific Rim and (a legit) Godzilla. Remembered for casting “no names,” the cast of Cloverfield actually went on to become names: Lizzy Caplan, who played Marlena, is now an Emmy-nominated actress. T.J. Miller, who actually shot a large portion of Cloverfield himself, has voiced Disney characters and delivered a memorable acceptance speech at the most recent Critic’s Choice Awards. In film school, “Cloverfield” was our slang for shaky, verite photography. Cloverfield’s director, Matt Reeves, has crafted modern genre gems like Let Me In and Dawn of the Planet of the Apes. And Abrams, of course, has made Star Wars, and when he wrapped Force Awakens in his guard I didn’t care to dig. I had enough. I knew better than to try.

Surviving relics of the internet’s hunt have disappeared, almost as if there never was a hunt at all. The YouTube channel that spearheaded most of the efforts has been deleted. The original 01-18-08 website that had photographs of Rob’s party is gone. MySpace’s formatting changes have stripped the characters’ profiles of their original worth. You can still visit Slusho, but their store of shirts and hats has been closed for years.

Cloverfield was never an underground secret, it was always a corporate product. But at the dawn of the new internet, myself and faceless others navigated through the its dark waters and I witnessed the power of crowdsourcing driven by excitement, to solve a mystery we had crafted ourselves. We could have just waited, but why? Abrams still likes to keep his films shrouded in secrecy, but no Star Trek or Star Wars could ever match the grime that covered Cloverfield. It made the digging all the more fun.