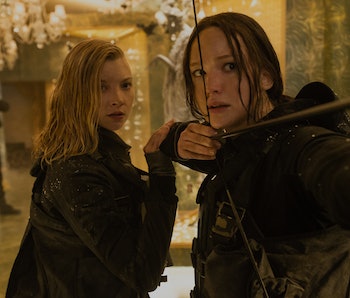 We’re in a weird spot. Call it franchise fatigue. We’re in the throes of the end of the year where studios bank on their $300 million tentpoles to pull in summertime numbers, and the field may just be too crowded. This weekend at the box office the winners were still kind of losers and the losers were kind of winners. Everything is mixed up, and it’s a testament to the fact that the numbers don’t always tell the complete story. Still, the numbers mean something, and a first place finish or a third place finish still means the difference between the gold and bronze. Let’s explain what all that babbling means.

As predicted, the last installment of the wildly popular YA adaptations starring Jennifer Lawrence wasted no time in getting right to the top spot, continuing the $100 million or more opening weekend hauls for each of the four films. It seems like a victory for the swan song of the series, which has made $2.5 billion worldwide. But Mockingjay Part 2’s $101 million gross is not only $20 million less than Mockingjay Part 1’s opening weekend, but it’s also the lowest opening weekend of the series altogether. So why the faux triumph? Spectre definitely deflected a chunk of the audience, as did The Force Awakens. People are most likely saving their money for December and focusing on Star Wars instead. Another thing to question is quality. Part 1 was the worst-reviewed entry in the series yet, and fans probably objected to splitting the final movie into two parts. Here’s a hint to Hollywood: Make the first part good if you want people sticking around for two more hours to see how it ends. Relatively it’s a misfire, but the Mockingjay movies alone have already grossed over $1 billion worldwide so an abject failure, it isn’t.

What Was Disappointing: Spectre

Spectre is disappointing insofar as it isn’t Skyfall. Bond’s latest installment may have dipped a percentage less than the 2012 movie in its second weekend, but the successes can’t last forever. Spectre dropped 56.7 percent for a $14.6 million take in week three compared to Skyfall’s 13.6 percent dip with a $34.5 million take. It’s still outgrossing both Casino Royale and Quantum of Solace at this point in its run, but look for it to have trouble hanging on as movies like Creed and The Good Dinosaur crowd the marketplace beyond Thanksgiving. The real question now is whether Spectre will have enough oomph to top the $1 billion mark worldwide. It stands at about $677.8 million worldwide at the moment, and the final $300 million to reach that goal looks like a mission even 007 won’t be able to pull off.

What Was Surprising: Carol

All this talk of multi-billion dollar franchises makes you forget about the little people. The new limited release of Carol, director Todd Haynes’ adaptation of author Patricia Highsmith’s novel The Price of Salt starring Cate Blanchett and Rooney Mara, may look out of place in the 23rd spot overall, but its $248,149 weekend tally came from just four theaters. Its $62,037 per theater average isn’t too shabby, making it the third-highest opening for a limited release after Steve Jobs and Sicario. While the limited success of Steve Jobs makes the unexpected failure of the movie in wide release makes people wary of what these small numbers might mean, Carol is a different story. It was always geared towards the arthouse crowd, and looks to build word of mouth and to single out individual performances for some new looks around Oscar season.

What You Should Take a Chance On: Take Your Pick

It’s a fairly eclectic multiplex these days: the kids, the tweens, the teens, the parents, and the grandparents are all covered. The holidays promise to keep that trend going, as Creed, The Good Dinosaur, and even something like Victor Frankenstein look to hit specific demographics in the coming weeks. It’s probably programmed that way. These movies want to get as much as they can before December, then Star Wars will become the biggest movie of all time.