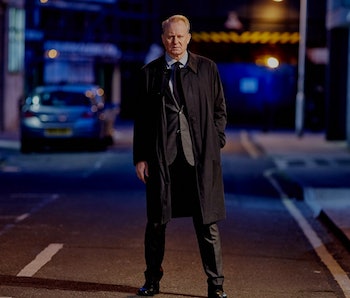 “You don’t see the world straight, River. That’s your blessing, and your curse.” So sneers one of the false suspects in River — Netflix’s newly acquired BBC crime mini-series — to titular police inspector John River. River uses hallucinations — “manifests” — he sees of people (usually dead) to solve crimes, and work through everything about himself he represses. The role is taken up, with an unprecedented level of power and commitment, by Lars von Trier’s go-to man and Marvel film regular, Stellan Skarsgård.

River, like Hannibal’s Will Graham before him, is the ultimate sympathizer. His own emotional vulnerability, borne of childhood trauma, makes him a vessel for other people’s obscure, unsettled mental realities. The “manifests” are not supernatural, because they are all in his own head; both he and the audience recognize this. The characters simply externalize his troubled mental topography, only telling him what he already has figured out about them and himself. River tells them things to the ghosts that he can’t bring himself to articulate in his real life, where he’s an apt sequel to Swedish detective hero Kurt Wallander: a gruff but sensitive loner who lives in an apartment full of vinyl.

As River delves deeper into the sordid circumstances surrounding the death of his former partner, Stevie (Nicola Walker) — he was present for it — and excavates his unexpressed feelings of love and devotion to her, the voices get louder and more invasive. Reality warps more, just as the mystery begins to feel increasingly like a shaggy dog story. River explores a couple of secondary cases along the way — in both cases, tales of inconvenient love gone wrong — and witnesses several deaths. After these mini-sagas are over, River acquires their dead. The victims follow him around, jocularly coaching him in his casework, as well as cheerleading him as he toys with the possibility of romance with a reticent police psychiatrist (Georgina Rich).

If the concept sounds strange, that’s because it really, really is. It’s also an acquired taste. In the first episode, especially, the visualized ghosts and emotional melodrama seem like a recipe for certain disaster. But Skarsgård’s eccentric performance becomes affecting very quickly, a study in how to effectively play mental illness on-screen. It’s almost impossible to deal with this type of subject matter well, but showrunner and writer Abi Morgan (The Iron Lady, Suffragette) accomplishes it while handling a modestly compelling police procedural plot-line at the same time.

River never stops listening to his voices, even at the end of the series, though he seems to beat out the spectre of a 19th century serial killer he had been reading about (one of the least convincing elements in the series), and makes a parting reconciliation with Stevie. People stare at him in the office, on the street, in the subway — his affable and admiring partner, Ira (Adeel Akhtar), helps him clean up his mess, and does the hard research in cases when he’s too distracted. But as he says, “Madness can bring its own kind of clarity.” Even if it can also bring extreme hardship — even threatening his life — it is the way River chooses, and loves, to live.

As is probably clear at this point, this is far from your average hard-boiled cop show. It’s even less that way than its clear bird-of-a-feather predecessor in original Netflix programming: unconventional serial killer saga The Fall. In River, the typical formulas are turned way inside out. Emotions are both told and shown; they do not simply seep out at particularly intense moments in the investigation. This police force knows how to cry. Many of the ensemble cast’s characters — police chief Chrissie Reade (Lesley Manville) and Stevie’s little brother Frankie (Turlough Convery), especially — are scrutinized in painful, moving depth. The show embodies River’s deep empathy for the downtrodden of the world — whether oppressed by society or their own emotional predilections.

The reductive version of the show’s implicit argument is that perhaps River and his “nutter” ilk are as — or more — sane than those who strive to conform rigidly to societal norms: family, the pursuit of wealth and on-paper happiness. In the show, those who strive for the latter end up disgraced and heartbroken, or become monsters. “I’m a good officer, but in this world that’s not enough. In this world, you have to be able to smile, and drink a pint, and say ‘How was your day?’” River mutters during a forced psychiatric evaluation. “In this world, no one can be different or strange or damaged.”

In its unyielding, stylized intensity, River risks coming off overbaked or unintentionally comedic, but the payoff for its daring approach is plenty of unforgettable moments. Thanks to Morgan’s writing and the expertly rendered performances that support it, the series has a fractured charm that pulls you in.

Also, it should be noted: it has a great soundtrack.