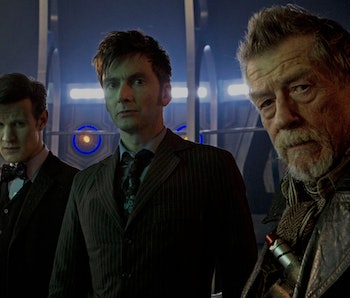 Doctor Who fans, perhaps uniquely in sci-fi pop culture, get to celebrate their equivalent of the Big Bang. November 23rd marks the 54th anniversary of “An Unearthly Child,” the debut episode of Doctor Who and the origin point of an ever-expanding universe. Originally airing on the BBC at precisely 5:15, William Hartnell’s Doctor Prime hopped in his big blue police box and embarked on an adventure that has enamored millions of fans for more than a half-century. Happy birthday, Doctor.

Why Do We Celebrate Doctor Who Day?

So what do we celebrate on Doctor Who Day (also known as “TARDIS Day” to the super cool kids)? Of course the Doctor, the companions, the villains, and the great Doctor Who mythology that has been lovingly constructed over the past 5 decades. Doctor Who captures our imagination. It offers us a chance to get out of our heads an hour at a time, to ponder science and philosophy, and when it really works well, to ponder our own humanity.

But there’s something bigger than that. The real fun in any show that reaches this sort of cult status is fan interaction. Die-hard Doctor Who fans obviously love the show, but we love being Doctor Who fans and interacting with other fans just as much. We love to argue over the best actors (Matt Smith), outfits (Jon Pertwee’s cape and walking stick combo), and villains (Cybermen. Sorry, Weeping Angel and Dalek people, it’s not even close!), quizzing each other on obscure Who history, and all of the inside jokes and Easter eggs. Ultimately, we love to nerd out, and it’s even better when we can nerd out together.

That being said, here are a few tips on how to celebrate this year’s Doctor Day (or Doctor Weekend if you’re feeling particularly frisky):

Whip up some fish fingers and custard, get that cardboard TARDIS cutout out of the basement (I know I’m not the only one. Don’t lie.), and invite your fellow Whovians over for an afternoon viewing party. Let everyone pick their favorite episode then discuss why their choices are so much shittier than yours. As noted, the best Doctor Who conversations tend to be friendly debates (read: heated arguments) anyway.

Never had the chance to get into the older episodes? Netflix used to have you covered, but earlier last year the episodes were removed as a result from a deal with another streaming giant, Amazon. Do yourself a favor and check out a random sampling from the Doctor’s past. You might find you like the cut of those old-timers’ jibs a little better than the sonic screwdriver-wielding youngsters of the Moffat era.

Channel your inner Osgood and accessorize with an item or two from your favorite Doctor’s outfit. This will be especially effective considering today is Thanksgiving, and family’s will love your bow-tie, ridiculously long knitted scarf, hell even a celery stalk on your lapel. It’ll make your inside parts giggle, and there is this awesome thing that happens when you find out your random cousin is a fellow Who fan.

Listen to the “Dr. Who Intro Theme Dubstep Remix”

There’s really little to say other than just, I don’t know, listen to it.

But Dude, I Hate People and I’ve Already Watched Every Episode Like Six Times!

No worries, my introverted friend! Over the past 15 or so years, the folks over at Big Finish Productions have amassed a massive collection of official licensed Doctor Who audio plays featuring Doctors One through Eight, featuring voice work from the surviving original cast members. Much like the TV show there are some audio episodes better than others, but there are quite a few audio season (namely those featuring the Fifth and Sixth doctors) that are better than the original TV shows. Throw in your ear buds and dig the downloads on the solo tip.