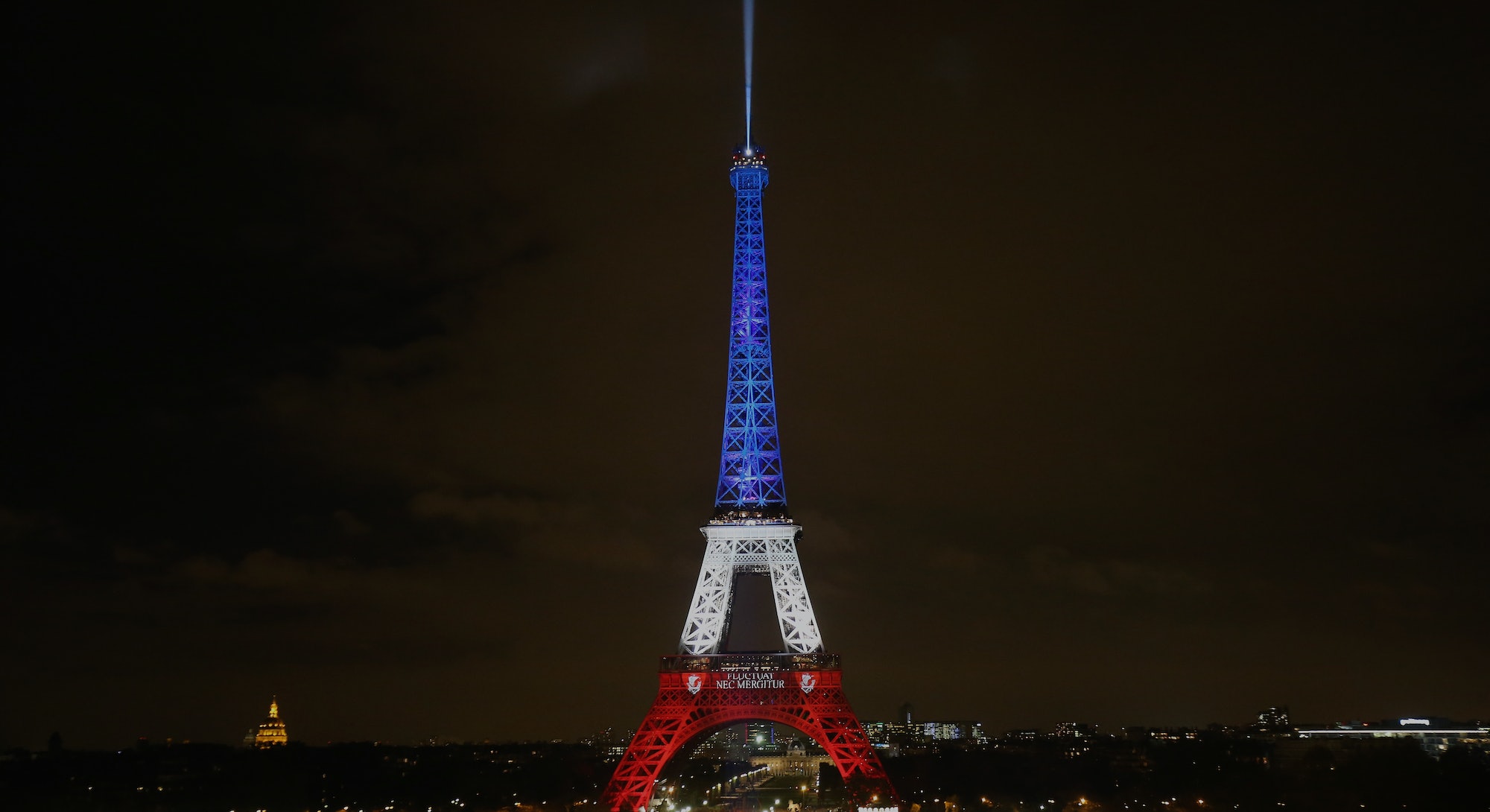 Let’s take a trip back to early 2003. The United States was plunging, full tilt — Major Kong-style — into the Iraq War. The French — as part of the United Nations Security Council — were, rightfully, hesitant to jump right in (given such niggling details as morality and facts and common sense) and, oh my, the backlash. Burgundies were poured into gutters from Anaheim, California to Zuni, Virginia. People stopped buying French cheese, prompting the question: Would anyone who regularly purchased imported fromage boycott it for such an idiotic reason? “First Iraq Then France” invasion stickers and tees were drawn up. And our collective faces got stuffed full of freedom fries while the streets ran red with Bordeaux.

Now, after the ISIS atrocities in Paris, we’re faced with a cent huit. U.S. monuments and skyscrapers are glowing with the Tricolour. France’s flag has been carried into NFL games and millions have stretched an opaque blue, white, and red across their Facebook profile pics. Americans are even popping Champagne and eating foie gras as a sign of camaraderie.

Antoine Songy, president of preeminent French wine importers, Robert Kacher Selections, tells me, “I was in France last week, and came back last night: enormous amount of support from U.S. people, on Facebook, Twitter ‘Je suis Parisien,’ lots of French Flags, National Anthem, etc.” The Châlons-en-Champagne-born gent sent me a note (in French, translated below) that one of his suppliers received:

“We feel the pain of the French and send you our support and sympathy in these terrible times, for the French nation and our entire civilization. Here in New York, we lived through the tragedy of September 11th and we know full-well the horror of terrorism. From here, we look at the antenna of the One World Trade Center lit in red, white, and blue, and know that France will never give in to terror, and the terrorists will never destroy our civilization: open, tolerant and free — exemplified by France.”

While the sentiments and displays of affection are legitimate and admirable, the move from petulant to fraternal seems a bit disingenuous.

There are calls of support for France’s bombings in Syria while condemning Obama for not doing enough — even as the United States is sharing intelligence info about the sites. A friend said to me, “France is making us look weak,” with the latent connotation that France is feeble. These circuitous condemnations are usually from one side of the political spectrum — the same that is now calling for a ban on refugees — and they all share the same illogical xenophobia. Look, the French are not weak. They watched the Nazis march down the Champs-Élysées. Go to 60 Boulevard Saint-Michel and see the bullet holes from both World Wars and tell me the French aren’t a tough people. Bon chance.

That they don’t embrace war quite as warmly as Americans do — maybe, just maybe, they have some historically grounded perspective on this — doesn’t mean the French people don’t deserve our unwavering dedication. See, that’s the thing: All of this support is wonderful. But it should always be this way. France is one of our closest allies. There should never be moments like 2003 and, really, the French way of life — the joie de vivre — is a beacon of civilization we should take time to notice. Drinking wine, eating rich foods, enjoying each others’ company, singing at soccer games, taking August off: I can’t imagine ISIS hating anything more.

As Songy tells me, “Consumers are going more and more for ‘subtle’ rather than ‘in your face,’ so French wines vs. American wines … less oak, less alcohol. Also, the value at $10 to $15 is very favorable for French wines: the exchange rate is good,” he says. “The choice is wider with plenty of new appellations, new domains, with very defined taste profiles.” In other words, French wine kicks ass. We should be drinking it all of the time, because of their merit and — oui — because we’re buddies.

France’s national motto, liberté, égalité, fraternité has been making the rounds this week and, it’s a maxim that might as well have been plucked from our own Constitution. “Liberty, equality, fraternity”: That’s us, too; we’re in. Americans just need to remember our pals once those Facebook profile pics start to switch back to neutral. In memory of those lost, keeping uncorking Rhône reds and unwrapping brie. But let’s never stop.