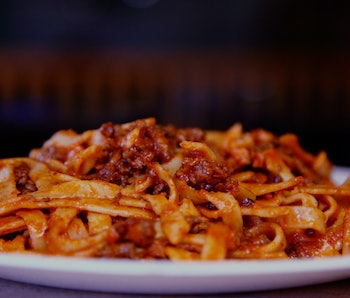 Aziz Ansari’s Master of None has been getting a lot of killer press. One of the major traits of Aziz’s protagonist, Dev — and of the man, himself — is that he loves pasta. He makes it and, well, something involving the noodles figures heavily into the finale. Now, I don’t make fresh pasta: I make fresh sauce. Emphasis on “fresh” IFYOUKNOWWHATIMEAN. But, seriously, if you’re still eating pasta sauce out of jars, you need reexamine your entire life.

Checking Amazon’s list of most popular sauces, it looks like we’ve come a long way. Prego and Ragú are around, but they’re kinda like the cousins at your wedding who you’re ashamed of because their entire reason for being is senseless. Still, even in a time where you can cop Rao’s Arrabbiata at Whole Foods and your local market is making their own refrigerated stuff, you can do better: You can do it yourself. Here’s how.

This particular one, from The New York Times. It’s fast, it’s easy, it’s delicious. As Julia Moskin says, “Homemade marinara is almost as fast and tastes immeasurably better than even the best supermarket sauce — and it’s made with basic pantry ingredients.” Sing it, sister!

Here’s how it goes. Can you chop up some garlic? Good, do that. (Do not, as I’ve mentioned before, ever buy pre-minced garlic. Might as well just open up a can of Chef Boyardee before you shop for used Snuggies on eBay.) Throw those little flavor bombs in some hot oil. Mash up a can of peeled tomatoes in your hands and then toss that in, with a little water. (You can grab some San Marzano or more expensive, imported tomatoes, but Trader Joe’s or your local shop’s brand will do just fine.) Cook. If you want, drop some dried oregano in and pop in some salt — don’t oversalt! — and crushed red pepper. I like to add a little red wine. Then dunk some basil and cook some more. That’s it. Moskin recommends 25 minutes; I cook it for slightly longer, say, 45 minutes. It’s so easy it’s jarring that jarred sauces still exist. And it’s cheap, too! Hell, I made it last night.

The sauce has bright flavors and colors, and pairs well with almost any shape: You know, because it’s a marinara. Getting this easy, flexible sauce under your belt can help you move into other territory. You can even double the recipe and freeze a bunch. It’s so much better than what you’re used to at home, you could probably pull a Screech and sell it to suckers who’ve been basically eating SpaghettiOs.

To paraphrase Pulp Fiction, my girlfriend loves pasta, which pretty much means I love pasta. That means — besides eating at far more Italian restaurants than I ever would, myself — attempting to ace a wide array of sauces. You can even pop some meatballs or sausage into the marinara above or move on to, say, this vodka sauce — also from the Times. Or Marcella Hazan’s recipe for a bolognese. If you’ve got some time to spare, Serious Eats has a fantastic slow-cooked recipe. M. Stew even mobs down on a one-pot pasta ‘n’ sauce dish. It’s getting colder out: Not much sounds better for a Sunday afternoon than taking hours to cook a sauce and, then, ladling it over a piping hide bowl of noodles — steam fogging up the windows. Well, the Denver Broncos securing home field advantage for the playoffs would be better — for me — but that’s for another time and place.

Like I said, I don’t fret over the fresh macaroni. Often, when I’m at a restaurant, it’s not immediately apparently what’s fresh and what’s dried. Still, if you want to plunk down some cash for some dough — that’s confusing, just seeing if you’re paying attention — by all means, go for it. The point, here, is just not to buy the bottom-of-the-barrel varieties. (Same goes for parmesan: You don’t need to get a slice from the Parmigiano-Reggiano wheel that costs more than a car in Bologna. A clone will do; just shred it that day.) My girlfriend has her favorite brands — many of which are imported from Italy and can be pricey — but I find that an outfit like De Cecco suits my needs. (The company also has the added benefit of not being homophobic.) Really, though, the sauce is key. Now, get to work.