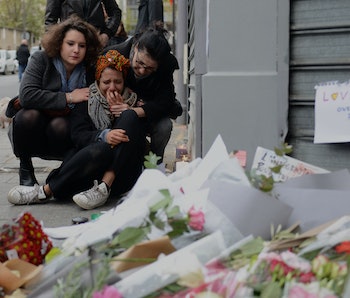 On the evening of November 13, 2015, after the start of the terror attacks in Paris, Twitter lit up with the #PorteOuverte hashtag, letting people in the area know where they could find a safe place to stay.

Later on in the evening of November 13, Facebook activated “Safety Check.” A relatively new feature, the Safety Check was added just over a year ago on October 16, 2014, in case of natural disasters. Facebook founder Mark Zuckerberg announced the addition of the feature while in Tokyo, recalling the devastating earthquake and tsunami from a few years ago as one of the inspirations for the creation of the application.

However, last night marked the first time that Facebook has activated the feature outside of the instance of a natural disaster. The Safety Check has been used most recently during Hurricane/Tropical Storm Patricia and the earthquake in Pakistan in October, along with the earthquakes in Chile and Nepal earlier this year.

The Safety Check allowed thousands of people in Paris to let their loved ones know about their whereabouts while also alerting friends outside of the country about their status.

Here’s a quick rundown of what the Safety Check is all about:

How Does It Work?

If you are in an area where a Safety Check has been activated and have geotagging activated on your Facebook account, you will get a notification prompting you to check in and let your friends know you’re safe.

Conversely, if you are not in that area, but do know people in the affected area(s) where the safety check is, when they check in as “safe,” you get an automatic notification on Facebook — just as you would if someone liked or commented on one of your posts.

Who Can See It?

Anyone in the affected area(s) or anyone with Facebook friends there will get an alert.

If you want to see if you have any friends in Paris who have checked in via Safety Check, you can do so here.

When Does It Happen?

Since this was the first time the Safety Check has been used during a non-natural disaster, it shows that the team at Facebook ultimately makes the call on what catastrophes are worthy of a Safety Check.

While Twitter proved to be an important tool in providing immediate assistance to survivors in Paris, Facebook also proved itself as a vital avenue for finding out friends’ whereabouts — especially for people who aren’t on Twitter or couldn’t wade through thousands of #Paris and #PorteOuverte hashtags last night.

More like this
Innovation
8.14.2022 10:00 PM
60 years ago, an iconoclast designer revealed a fix for our biggest tech problem
By Tim Gorichanaz and The Conversation
Innovation
7 hours ago
Tesla software updates reveal a potential roadblock to electric vehicles’ expansion
By Vivek Astvansh and The Conversation
Innovation
36 minutes ago
This high-tech camera may help protect our identities — here's how it works
By Molly Glick
Share: