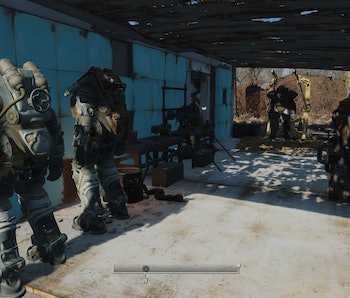 It’s no secret that Bethesda’s latest open world project Fallout 4 is a huge, huge game filled with tons of content and hundreds of ways to approach it. Sure, the wasteland of Boston sounds overwhelming, but here’s a few tips to help get you started when you step out of the vault.

1. Use a Variety of Different Weapons

From the very beginning, Fallout 4 gives you plenty of weapons to pick from, including the classic 10mm Pistol and the new crank-powered Laser Musket, and while it may be tempting to use the latter for most of your engagements, it’s important to remember that ammo is scarce in this installment of the Fallout franchise. While you are exploring, you’ll find plenty of different ammo types in a wide variety of places, but you won’t start out by finding a lot of ammo for a particular weapon as in past games. Make sure to pick a few different weapons to invest some time into, such as the Pipe Pistol and 10 mm Pistol — that way you’ll have a larger ammo reserve when you need it the most. It’s also worth mentioning that the Scrounger perk is extremely useful here, increasing the ammo you’ll be finding in the wasteland. Consider picking it up early if you’re concerned about your ammunition reserves later down the road.

No matter what play style you end up pursuing in Fallout 4, weapons and armor are an important part of survival in the wasteland. Now, both can be modified extensively with various upgrades and perks. Unlike previous games, Fallout 4 doesn’t provide you with much when you first step out of the Vault — it expects you to craft your own gear with the scrap laying around. This makes picking up perks like Gun Nut, Armorer, and Science important early on in the game, so that you can craft weapons and armor to help you survive in the wasteland. Weapons can be modified to give you larger magazines, more damage, or longer range, while armor pieces can also be modified to increase carrying capacity, reduce detection when in stealth or provide resistances to certain types of weapons.

Power Armor in Fallout 4 is one of the strongest tools at your disposal and a set is provided to you very early on. But while the new Power Armor mechanics make it one of the most valuable tools in the game, they also make it one of the easiest pieces of gear to exhaust resources with. Not only does Power Armor require repairs when damaged, but it runs on Fusion Cores, which are pre-war batteries scattered throughout the wasteland. During the first eight or so hours in Fallout 4, these cores are extremely difficult to come across — which makes your Power Armor a limited, but powerful resource. So, as much as it hurts not to be in the Iron Man suit, make sure to use your armor sparingly from the start. At least until perks such as Nuclear Physicist can be taken to extend the duration of your Fusion Cores or more can be purchased from vendors.

4. Keep Your Radio On

Not only does your Pip-Boy Radio offer a wide variety of fantastic hits from Diamond City, but it will pick up random signals while you’re roaming around the wasteland looking for loot. These signals, whether they be military frequencies or settler distress calls often lead to side quests, activities, or, in some cases, full faction questlines that you wouldn’t find otherwise. While these can certainly be investigated later, not all of them remain in the same position throughout the full game, so make sure to spend some time looking into these radio signals.

5. Build One Settlement at a Time

Settlements are a new addition to the Fallout universe, allowing players to construct their own bases and develop supply lines for those in their communities while building up each one, but it can quickly become overwhelming. Not only do new quests pop up, encouraging you to build more settlements and continue to expand, but settlers will request (and require) more commitment from you each step of the way. However, focusing on a single settlement from the get-go will allow you to expand at a much steadier pace and keep settlements secure. Each requires defenses, power, water, food, and places for your people to sleep — and it’s a much better practice to lock down one area before proceeding to the next. Otherwise? You might find yourself fighting to keep your settlements established later down the road.