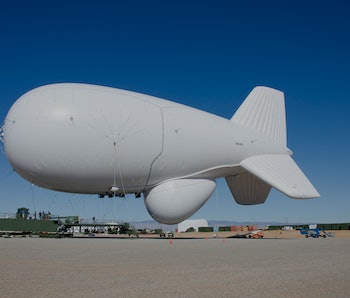 Until an investigation is complete into the JLENS Blimp that broke free from its tether in Maryland and wreaked havoc along the East Coast before landing in Pennyslvania, the expensive program is on hold. Yet even if authorities decide to keep the $2.7 billion missile defense system flying, questions are cropping up over failed military protocols. Namely, would anyone want it hovering above them?

Those who followed the live television coverage when the JLENS floated off in late October may have caught rumors that people living near the airships were considering a suit for endangering their households. A runaway blimp story is fine for laughs on Twitter, it’s another thing entirely if you’re afraid of having your home shredded by a free-flying tether cord.

“The thing we kept coming back to is this is going hundreds of miles in four hours, dragging this cable that is strong and thick enough to hold this thing aloft,” says Matthew Brown, who covered the runaway blimp as Senior Editor at the Baltimore Sun

“Imagine this cable coming through your neighborhood at 40 miles an hour. it would kill people, tear down houses. That’s kind of what it was like.”

Then consider that the military believed JLENS tethers were supposed to be unbreakable. JLENS Emergency Procedures obtained by The Baltimore Sun clearly state that not only is it “unlikely” that the tether would break, but that the blimp would automatically bring itself down.

Here’s the slide related to a tether break, promising that once deflated the JLENS would be on the ground in a mere 245 seconds:

Instead of a short-lived emergency, the government had to track JLENS with two fighter jets for almost 200 miles.

Army Major Beth Smith of NORAD and the U.S. Northern Command confirmed to Inverse that “no determination has yet been made” on the program’s definite future, or what would be done with the JLENS if it is decommissioned.

The military has used surveillance blimps with success in Iraq and Afghanistan, but its hard to predict any politician standing up to have the JLENS program in on American soil, if not out of paranoia that the community is being watched somehow, but pure safety reasons.

Even longtime supporter Congressman C. A. Dutch Ruppersberger agreed that suspending the program was the right thing to do for now. Ruppersberger’s office has yet to respond to Inverse interview requests, we’ll update when we hear back.