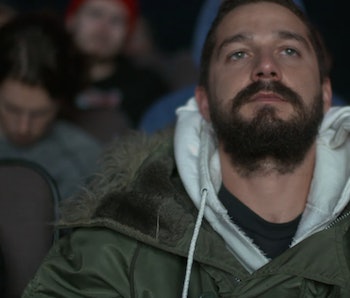 For the past three days, Shia LaBeouf has been engaging in a bit of performance art at New York’s Angelika Film Center by watching his own movies in reverse-chronological order.

In a piece called #ALLMYMOVIES, his watching has been a feat of endurance that has required some light napping and Domino’s pizza to get through. New York artist Emma Sulkowicz calls LaBeouf’s performance “a participatory art piece, a relational aesthetics art piece.” Further, she says, “It’s not just a stunt. I think there are things to think about in the piece.”

Sulkowicz earned her own fame last year through Mattress Performance (Carry That Weight) — a piece of performance art that doubled as her senior thesis at Columbia University. From the beginning of her senior year, Sulkowicz carried a 50-pound mattress wherever she went on campus, as long as her alleged rapist was still attending the same school as her. What could have potentially taken a day ended up lasting until graduation.

Sulkowicz’s own performance required an amazing amount of endurance — both psychological and physical. It’s something she recognizes in LaBeouf’s #ALLMYMOVIES, which turns a potentially self-absorbed endeavor into an almost torturous one because he constantly has to face himself and his work.

“It’s the most egotistical thing on Earth,” she says. “Yet, at the same time, because of the endurance quality of it where he has to sit there and suffer through himself, suffer through watching himself, it’s humble and inclusive. Like, ‘I will suffer through this with you guys, if you want.’”

“If you want” is the real caveat. As she sees it, it is what we want. “Shia LaBeouf has reached this mythic status in our culture where people get excited just hearing his name. He’s funny to talk about and does weird stuff and is an exciting presence in our culture,” she says.

The performance, as a result, is “almost creating a place where people can go and worship him. Someone brought him flowers. Everyone wants to go bask in his presence and watch his movies with him.”

By offering the opportunity to sit with him, LaBeouf is including the viewer in his art and his potential suffering. “Like if I’m really that holy, you can sit with me. I’m inviting you to do it. I’m inviting you to watch me, if you really think I’m holy,” she says from LaBeouf’s perspective. “But at the same time,” she continues, “look at how much I’m willing to subject myself to you people as a mass. I’m willing to suffer for you.”

In this case, #ALLMYMOVIES becomes a “self-portrait,” as she puts it. “It’s a portrait of a person who’s reached legendary social status, which might make him seem larger than life. And it’s not even a struggle, but a commitment to showing people that he recognizes what has happened to him and also that he is still human.”

When I ask her what she thinks about people writing this off as a gimmick, she says that only drives the piece’s meaning further: “I think that people dismissing him for [undergoing a performance] that’s pretty rough is kind of a part of the meaning of the piece, whether or not it’s good or bad. I think it shows something about how we treat celebrities.”

The meaning of “celebrity” and how we interact with them are core tenets of the piece, according to Sulkowicz. “His body means something at this point. His body means celebrity.” She wonders, “How can he describe what that feels like to people? In some ways, the fact that his body means celebrity means that people will always sort of write off what he says, right?”

We feel like we can consume LaBeouf, but having him present in the theater turns an image into a person. “The experience of watching the live feed, you’re just waiting for something to happen and you want something from it. We have this weird desire while you’re watching it, which is like commentary on the public relationship with celebrities. We’re always wanting them to trip on stage. It’s a cultural hunger for celebrities to do things for us.”

She believes that “hunger” comes from a deeper cultural notion to put people on pedestals and exaggerate their behaviors to extremes: “Celebrities are used as examples of the extremely talented, extremely attractive, extremely good, extremely smart.” But, of course, she adds, “celebrities can’t exist without the regular person existing. I don’t think that our ideas of what’s normal would exist without having celebrities to use as an example of what’s admirable.” We want to feel better about our own lives, “so when you get these moments where they’re humans like we are — they’re normal just like us — people get really fascinated.”

Once again, LaBeouf’s #ALLMYMOVIES juxtaposes his image with his actual being. He’s a person, but he’s more than that. He’s giving something to the public, but we’re all taking something from him, too, as a result. He’s just acknowledging that he’s in on the joke. Sulkowicz believes he’s done it before, with the video “‘Shia LeBeouf’ Live,” a fantastical video about a murderous LaBeouf, during which he’s present in the audience.

“Yeah, honestly, that video might have the most to do with #ALLMYMOVIES…because the imagery is the same: Shia LaBeouf sitting in an audience and sort of applauding the ridiculousness that people construct out of his image.”

I end my conversation with Sulkowicz by asking her about her favorite Shia LaBeouf movie. It’s Transformers, but she can’t quite remember which. Maybe the third one, Dark of the Moon. She says it’s “because the cinematography was fucking perfect. These amazing shots of Shia LaBeouf making intense facial expressions against explosions and destruction were perfect.”

The explosions may not make too much sense, but they are perfect with LaBeouf. LaBeouf really acted in those scenes, even if they’re filled with CGI and special effects. They may feel surreal, but there’s a kernel of reality somewhere in there. Just like him sitting quietly at Angelika.

More like this
Entertainment
6.21.2022 11:30 AM
5 years ago, Michael Bay made the most exhausting sci-fi blockbuster of the century
By Graeme McMillan
Entertainment
6.19.2022 11:30 AM
You need to watch the best monster thriller of the '90s before it leaves HBO Max next week
By Mónica Marie Zorrilla
Science
6.30.2022 10:30 AM
Look: 10 jaw-dropping images reveal nature running wild in cities
By Jennifer Walter
Related Tags
Share: