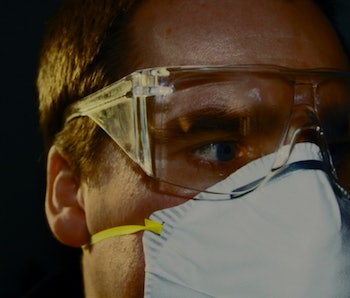 The plagues that threaten the world, as represented in the board game Pandemic, are not frightening to behold. Corpses and human anguish take the form of innocuous little plastic cubes. However, the die-cast representations of cast dies take on a sinister vibe: Cubes fly from city to city and, with a sudden flip of a card, take over uninfected metropolises. This spread is compelling enough that, eight years after its debut, Pandemic remains one of the most popular co-op board games around — so popular that a sequel felt inevitable. And that sequel, Pandemic: Legacy, has gone the gritty route. Riots roil cities and characters succumb to psychological trauma.

But how well does the new Pandemic mimic the poxes of our planet, the Bird and Swine Flus of the world? Is it down with the sickness? Inverse teamed up with Jasmine Abdelnabi, a biostatistician who professionally traces real-world outbreaks to fight off the cubes. In trying to defend the Earth, we found a new game that is taking its premise to a logical extreme.

Per Abdelnabi’s diagnosis, here’s what the game gets right:

“It shows the necessity of academics and the industry to lean on each other,” Abdelnabi says of the game and the communications it encourages. But, she points out, there are no language barriers or funding issues (not in the vanilla version of the game, anyway) within this cardboard context.

But not everything is accurate. What makes the game a game, and not a perfect epidemiological simulation, boils down to:

To be clear, Abdelnabi is a huge fan of the theme. “It’s a lot of fucking fun to be an infectious disease epidemiologist — it’s a dream,” she says. “And Pandemic does a really good job of making a complicated procedure fun.”

More like this
Mind and Body
11 hours ago
Why Won’t My Cough Go Away? Doctors Explain Why This Symptom Lingers
By Katie MacBride
Science
Feb. 5, 2023
The Plague Is Still Here — And It Could Infect Your Cat
By Tara Yarlagadda
Science
Feb. 4, 2023
How The Last of Us Reveals a Deadly Truth About Fungal Infections
By Rebecca A. Drummond and The Conversation
LEARN SOMETHING NEW EVERY DAY.
Related Tags
Share: