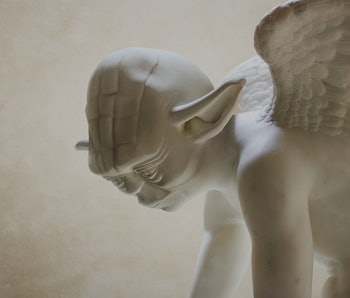 A French artist who goes by the name Travis Durden has rather artfully merged the heads of iconic Star Wars characters onto the bodies of Greek statues. While you ponder what this says about our culture as a whole, here’s how he did it:

Durden (who chose the name based on the lead characters in Taxi Driver and Fight Club) photographed the statues at the Louvre in Paris and used 3D modeling software to design the heads of Yoda, Darth Vader, a Stormtrooper, and others. He then digitally attached the heads to the bodies of said statues.

The result are the below images, which are certainly arresting if not completely original or brilliant. Sure to attract attention of Mr. Brainwash fans everywhere, you shouldn’t be surprised to see these designs for sale at bootleg t-shirt kiosks by the time The Force Awakens opens on December 18.

The images are part of The Expo Strikes Back, a 35-artist group show that opened on October 10 at Galerie Sakura in Paris, full of, yup, other Star Wars mash-up art (samples below). The exhibition runs through January 15, 2016, and includes — we’d be remiss to exclude this ridiculous one — a Flemish C-3PO by artist Sacha Goldberger.

Here are other samples from the show:

And here’s the full range of statue images from Travis Durden: