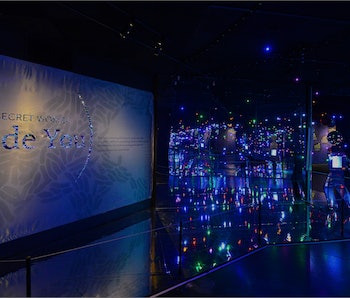 “I do not see myself as a lone entity anymore,” Susan Perkins said at a press conference at the American Museum of Natural History yesterday morning. “I have crossed that line. I am an ecosystem.”

Perkins and her colleague Rob DeSalle, both curators in the Division of Invertebrate Zoology and Sackler Institute for Comparative Genomics at the AMNH, co-curated The Secret World Inside You, the museum’s new exhibit on the weird and complex world of the human microbiome.

Perkins has a handy definition for the gargantuan number of microorganisms in our bodies at a given time. “‘Microbiome’ is a term to describe either all the organisms that live in or on us, or it’s also sometimes used to talk about genes,” she explained. “We have about 20,000 human genes in our genomes, but hundreds of thousands of microbial genes. So they really are affecting how we look, how we behave and who we are.” She went on by putting our vast internal makeup into perspective: “We have anywhere from between 30 trillion and 400 trillion cells living within us at any given time.”

Bacteria, beneficial and harmful, make up you and everyone around you. The exhibit cleanly conveys the ways these organisms affect our health, but DeSalle agreed that it’s a field still in its infancy. “The paradigm shift is really toward understanding the ecology of the microbes that live in and on us,” he said. “In some ways we’re kind of like the explorers of the Amazon 150 to 200 years ago. We’re exploring the microbiome and discovering things that are just amazing about biodiversity, and we’re also rapidly using the information to apply it to medicine.” He concluded: “Knowledge about the microbiome and the ecology that resides in this microbiome is essential to fine-tuning human health.”

The Secret World Inside You suggests the possibilities of the multi-purpose field of microbiome studies. “The discovery of the diversity of the microbiome and the implications for our health is probably the first time that we’ve had a major medical breakthrough that every one us of could go home and act upon,” Perkins said. “Learning about how we behave, the foods we eat, the things we do, the antibiotics and other medicines that we might take, and their effects on our microbiomes, gives each and every one of us the power to do something that directly affects our health. I find that super exciting.”

The exhibit itself is also super exciting, and here are five things worth checking out when it opens on November 7.

Pass through the social media-worthy opening hall, featuring a series of Instagrammable hanging lights that represent the types of microbes found in your body, and one of the first things you see is what the exhibit calls a “microbe exchange tunnel.” More lights visually represent the bacteria found in and on your body, while little touch-sensitive pads offer other guests visual stimuli to represent how even a touch can pass thousands of microbes. Different versions of the tunnels are scattered throughout the exhibit to show how microbes affect various parts of the body and even how microbes are passed between a mother and child. What’s the weirdest reproductive microbial fact we came across? Babies born via Cesarean section lack microbes passed during vaginal birth. Some doctors even swab C-section babies with bacteria from the mother’s birth canal to pass on missing bacteria.

Adolescence, old age, and even pregnancy can alter a person’s microbiome. The centerpiece of the whole exhibit is a massive interactive table featuring a projection of a woman’s body with pointed highlights from head to toe. Push one of the interactive zones that pop up and learn a thing or two about the ridiculous amounts of bacteria on you at a single time. Use this table to figure out that over 1,100 different kinds of bacteria live in your mouth, including Streptococcus mutans, the culprit behind tooth decay. Also be sure to check out the wound on the knee to see how bacteria form to combat MRSA, or the wet bacteria on your toes that cause smelly feet. Another mini-highlight is a nearby table that lets you smell the similarities between bacteria on cheese and bacteria on your stinky feet.

This 6-foot-tall tube is a real live microbial ecosystem made with mud and other nutrients like eggshells and scrapped newspapers. While not really outwardly exciting, the column illustrates how bacteria thrive in areas where food is digested and fermented. The microbes in your small and large intestines also add extra protection to your gut lining, prevent diseases forming there, and can even change your emotion based on appetite.

This one is for the kids. Still, it’s rad. Your microbiome is directly affected by your diet. Red meat, for one, feeds malevolent bacteria that cause ailments like heart disease, while plants unsurprisingly strengthen bacteria that fortify your large intestine. To show this, the exhibit has come up with a pinball-like game where you pull a plunger to launch different varieties of food like broccoli, cookies, or kimchi into a digital stomach to try to maintain a healthy microbiome. Another scenario in the game has a function where players decide whether to prescribe a fecal transplant (yes this is exactly what it sounds like) to battle your digital body’s resistance to antibiotics.

The exhibit concludes with a live classroom-type presentation meant to gather museumgoers in another type of interactive forum. A teacher in a lab coat polls visitors about different microbe questions, while responses are tallied with three buttons at each chair. For instance: true or false, you have as many microbes on your skin as there are around your house? The answer is true! Where you live is like a microbial map of you yourself. When you move, your bacteria populates a new space in just a couple of days.

When I asked Perkins about what she thought was the best part of the exhibit, she went with a more classic approach. “The body table is definitely a favorite, but I have to say I’m really proud of the videos accompanying the exhibit as well,” she said. “We got some of the all stars of microbiome research to willingly come in, and each of those people gave us about two hours of their time to talk about the microbiome and how it’s changing our views of health, so I’m really proud of that video.”

Decide your own favorite part of the exhibit when it opens at the American Museum of Natural History in New York on November 7.