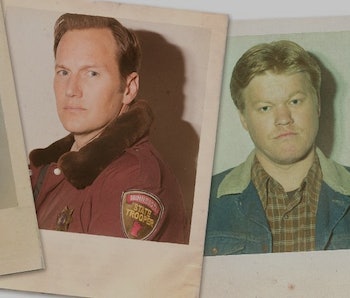 It’s been a year or two since I watched a new show that struck me as basically perfect — or at least, one that truly felt like something unique on television. The closest to “perfect” I feel like I’ve come recently was The Americans, though I wasn’t sure if that was more of a personal “perfect.” The FX spy show and Reagan-era period piece speaks to my interests, and maybe the skillfulness of the plot, the wonderfully deadpan performance of its two leads, and the charmingly rendered, leg-warmer-filled Cold War landscape obscured other overdone tidbits.

Perhaps FX is the channel for me right now — and maybe the network turning in the best work on TV right now. I’m not talking about AHS: Hotel, mind you, but the second season of the Coen Brothers-produced, writer/director/novelist Noah Hawley-created anthology crime show, Fargo. I have no reservations about claiming the show as the most inventive on television at the moment, even over the periodically brilliant The Leftovers. The formal experimentation and expertly hardboiled writing in Fargo makes shows like True Detective’s first season look like small potatoes in comparison. Roll over, HBO.

It took a lot of convincing to get me to go anywhere near Fargo. I came across relatively scant coverage and had no personal overlap with its fanbase. I was ignorant, even, of its surprisingly star-studded cast: Billy Bob Thornton, Martin Freeman, Bob Odenkirk, and Colin Hanks, among others. At first glance, there was no indication that Fargo wasn’t some mediocre, fan-fiction-y franchise along the lines of Bates Motel, Sleepy Hollow, or even Minority Report. As much as I love the Coens and the original film (and perhaps because of it), the last thing I wanted was to see the world of their career-defining 1996 movie be flipped into just another pretty-good procedural. Last year’s art film Kumiko, the Treasure Hunter’s truly outlandish and Herzog-heady tribute to the original movie’s greatness was the only continuation of that universe I felt I needed.

As it turns out, I was being completely unfair. The serial Fargo takes a Coen-esque sensibility and teases it out in all directions, and in unforeseen ways. The show is a black-comedic, formally looney funhouse across both seasons, but especially in Season 2, which is four episodes in at the moment. Season 1 —focusing around a labyrinthine series of murders committed in 2006 across Minnesota — is a gripping, excellently plotted, and conceptually rich series, but at times, it did feel like it was trying to replicate what was good about the Coens’ universe a bit too self-consciously. Even though the season’s events and characters are wholly unrelated, it plays into the film’s mythology and basic character types: Most notably, loser salesman Martin Freeman stands in for William H. Macy, and shrewd small-town cop Molly Solverson is the Frances McDormand equivalent. Buscemi’s buried money actually becomes both a central plot point but (more so) a symbol for the increasingly psychotic “supermarket king” played by Oliver Platt.

The current Fargo season is better for shaking off the nostalgia. Set mostly in Luverne, Minnesota — outside of Fargo — in 1979, it appropriates only the Coen’s themes: mostly, the mystical relationship between chaos and fate in the universe. It’s an ensemble drama comprised of several intertwined morality tales. One centers around a triple homicide in a diner, and the other around a battle between the Kansas City mafia and the Fargo-based Gearhart family crime syndicate for domination of Minnesota-area drug and stolen goods distribution.

The cast is even more outstanding this time around — dominated by the performances of Patrick Wilson as the wily, stoic cop in charge, Kirsten Dunst as an unsatisfied hairdresser with an unacknowledged pension for violence, and a portly Jesse Plemons as her hapless and aspiring butcher husband. And don’t forget Ted Danson and Nick Offerman. Everyone has to wrangle with Kansas City’s chilling muscle (the sinister, grinning hitman Mike Mulligan, played by Bokeem Woodbine, is a wonder) as well as the brutal and powerful Gearhart heir Dodd (Jeffrey Donovan). All of these performances are expertly controlled and indelible, and Hawley’s characters consistently and effortlessly circumvent archetypes.

All the Fargo permutations focus on small town dynamics and explore what lies behind the outwardly genial way their people interact with one another. They dig into tics and mannerism, both sinister and funny. There’s an air of uniformity to the presentation, but underneath there are darker, repressed aspects, or — perhaps — just the spirit of a scared animal, hiding. When people are, to some degree, strangers to themselves, one can always expect the bizarre when they are pushed to extreme situations.

The bloody action and sickly mini-comedies of errors seem to be set in sleepy locales where These Sorts of Things never happen. But the pall of the war hangs heavy on everyone we meet. Every third man is a dead-eyed vet with distrust and horror engrained deep within them. Wilson’s cop tells stories of staring into the eyes of men just struck by landmines who “didn’t know they were already dead.” The Summer of Love is over. “You know what happened to Flower Rain Blossom?” Mulligan puts it. “She’s on methadone in Bismarck, turning tricks for breakfast meat.” Even in quaint, frozen-over Minnesota, everyone has to prepare for the worst, or else prepare to face the devil himself. “You still think it’s Tuesday,” Wilson threatens Plemons and Durst, clinging to their last hopes of hiding their crimes and preserving their simple life. “You have no idea what’s coming.”

At night, a strange unidentified aircraft — by no indications of this Earth — circles Luverne quietly at night.

Down to its freewheeling cinematography, fractured but economical storytelling, and overactive, deeply ironic soundtrack which almost functions like another character, Fargo is pretty awe-inspiring on nearly every front. Also, it needs your help to stick around. Season 2 premiered to nearly half of the ratings of the Season 1 pilot, and goes up against sports action in its late Tuesday night slot.

You can watch episodes on FXNow or On-Demand, and catch Season 1 on Hulu Plus. Remember, you can jump right in with Season 2 without having seen the first; these are completely separate stories. There’s plenty of time to catch up; do so and join #FargoHive immediately.