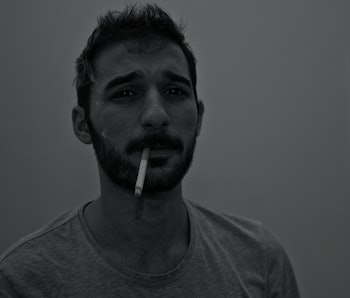 Four of every 10 adults in Greece is a daily cigarette smoker, according to recently released health statistics.

Meanwhile, smoking rates have declined in nearly all of the 33 other member countries in the Organisation for Economic Co-operation and Development.

About 39 percent of Grecians smoke cigarettes daily, a figure that’s up 4 percent from 2000, while the average smoking rate across OECD countries fell six percent in the same period. Latvia and Indonesia were the only other countries to see tobacco use go up. The World Health Organization has called Greece’s smoking problem an “epidemic.”

Could Greece’s economic crisis, which has kept the country in turmoil since 2009, be partly to blame?

Here’s a weird thing: While the rate of obesity among Greek adults is about on par with the OECD average, their kids are the most obese in the world. This trend has been linked to financial hardship, with families switching to cheaper and less nutritious foods.

Alcohol, on the other hand, does not appear to be the vice of choice for the Greeks. Their per-capita consumption falls below the OECD average, with rates actually falling since 2000. Lithuania, on the other hand, leads with an astounding annual rate of more than 14 liters of alcohol per person, beating out Austria in second place by a wide margin. In Hungary, where average annual consumption is about 11 liters per person, the 20 percent of people who drink the most account for 91 of the alcohol consumed. In other words, one in five people in Hungary can just drink.

The United States, for its part, may no longer be king when it comes to overweight children, but still leads by an unhealthy margin when it comes to folks age 15 and up. Slow clap for America.

More like this
Mind and Body
6.16.2022 6:16 PM
Beer might actually improve gut health, study finds
By Elana Spivack
Science
23 hours ago
NASA launches CAPSTONE and more: Understand the world through 8 images
By Robin Bea
Science
6.28.2022 10:00 AM
How are drugs absorbed in the body? The science of medicine, explained
By Tom Anchordoquy and The Conversation
Related Tags
Share: