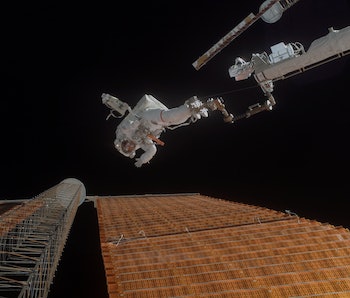 On November 2, 2000, NASA astronaut William Shepherd and Russian cosmonauts Yuri Gidzenko and Sergei Krikalev made their way to the International Space Station aboard a Russian Soyuz rocket. Since their arrival as the first three-man crew, human beings have resided on the ISS — meaning there have been people living in space for 15 years and counting.

The ISS is like a big house that’s been passed down among friends for years. About 220 people from 15 countries have called it home at one point or another. Most of them have been up there for just a matter of weeks or months at a time — although right now, Scott Kelly and Mikhail Kornienko are on a one-year mission to study the effects of long-term space habitation on the human body.

Construction of the ISS began in 1998 with the Zarya module being dumped into orbit. As the pieces added up, over 36 more space shuttle flights, the completed space station (with improvements) now weighs about one million pounds, sprawling out to the size of football field and boasting the amount of living and working space of a five-bedroom house.. Traveling at five miles per second at an altitude of 250 miles, the ISS circles Earth about once every 90 minutes, treating astronauts to a view of the planet like no other — over and over again.

About 122 astronauts and cosmonauts from nine countries have taken part in 189 spacewalks to build and maintain the spacecraft. (The 190th spacewalk is scheduled for November 6.)

The ISS was built as a long term piece of equipment that would play an integral role in human space exploration. It has so far exceeded expectations — hundreds of experiments carried out by ISS astronauts have led to a multitude of critical technologies and research breakthroughs, including water purification efforts, robotics, medical insights in human physiology and vaccine development, and many others.

Moreover, the ISS has been cited as a laudable example of international cooperation. “For more than a decade and a half, it has taught us about what’s possible when tens of thousands of people across 15 countries collaborate to advance shared goals,” NASA administrator Charles Bolden said today. In a speech just last Wednesday, Bolden also professed a belief that the ISS “ought to be considered for the Nobel Peace Prize.”

It hasn’t been all flowers and sunshine. The Columbia space shuttle disaster killed seven crew members who were returning from the ISS — putting construction plans on hold and forcing the station to completely rely on Russia for resupply for 29 months. With the retirement of the Space Shuttle program in 2011, the U.S. is once again relying mostly on Russia to help shuffle supplies and astronauts to and from the ISS.

The future of the ISS is murkier today than it has ever been. NASA spends about $3 billion a year to keep the ISS functional. Current plans call for the station to be kept running to at least 2024 — and maybe longer. Unfortunately, relations between the two countries mostly involved with the ISS — Russia and the U.S. — are at all-time low right now, stoking fears about how much longer the two countries will be cooperating to keep the ISS running.

Maybe that’s not just a bad thing. Though still running remarkably well, the ISS will soon meet the end of its life based solely on the fact that the technology will be too old. The U.S. and Russia are already discussing new plans to build a successor space station. These ideas are still dozens of years off — and if relations worsen, it could put both future and current plans in jeopardy.

But for now, with the ISS alive and kicking, for at least the next decade, we can expect to see the world milk the 450-ton hulk of metal for everything it can do. This includes helping to lay the ground work for our ultimate goal — getting human boots on Mars.