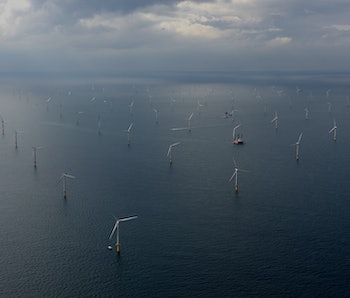 Soon Scotland’s rugged ocean cliffs will give more than a sweeping look at the sea: they’ll be a lookout point to the largest offshore wind farm in the world. In an effort to reach its target of reducing carbon emissions 80 percent by 2050, the Scottish government has given the go-ahead to a park of five floating 6-megawatt turbines. The first floating wind farm in the United Kingdom should be ready by 2017.

Known as Hywind Scotland, the project is going to be built by the Norwegian oil and gas company Statoil and installed off the coast of Peterhead. More than a quarter of Europe’s total wind crosses across Scotland’s landmass and shores, making it an ideal location for capturing wind energy.

With its multiple floating wind turbines, the Hywind project is different than more conventional wind farms. The turbines will be attached to the seabed by a three-point mooring spread and anchoring system. They’ll then be connected to an array of cables, with an export cable transporting the produced energy from the wind farm to the shore.

“The momentum is building around the potential for floating offshore wind technology to unlock deeper water sites,” said Scotland’s Deputy First Minister John Swinney in a press release. “The ability to leverage existing infrastructure and supply chain capabilities from the offshore oil and gas industry creates the ideal conditions to position Scotland as a world leader in floating wind technology.”

Moving toward renewable energy sources is a huge part of the European Union Energy Package, which includes the goal of increasing energy efficiency by 20 percent by 2020. According to the Oxford Institute for Energy Studies, a single average European offshore wind farm is capable of providing power to tens of thousands of households. Besides the advantage of lowering energy costs, the Scottish government says investing in offshore wind farms will create a huge opportunity to create new jobs.

Offshore wind projects will generate more jobs per megawatt than onshore wind and other fossil fuel industries, according to the International Economic Development Council. On the American side, the U.S. Department of Energy has estimated that reaching a target of 54 GW of offshore wind production would generate $200 billion in new economic activity. In a nod to the need of increased American attention to offshore wind farms, the Energy Department has emphasized that the offshore industry would bring many much-needed jobs to the economically depressed ports and shipyards in the United States.

The first U.S. offshore wind farm is scheduled for 2016. Called the Block Island Wind Farm, it’s to be a “small, experimental demonstration project” off of Rhode Island. While many U.S. ports could be modified to support wind development, so far little is being tried to do so.

Besides having the potential of cutting U.S. energy costs by $7.68 billion, per calculations by Stanford researchers, offshore wind farms could also be handy in the not-so-little task of dulling hurricanes before they reach land.