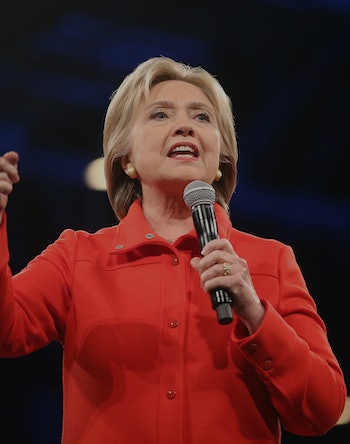 Hillary Clinton will soon announce her plan to eliminate the distinction between crack and powder cocaine, which should give Americans a picture of what President Hillary Clinton’s criminal justice platform looks like.

The reform would mean that those sentenced for crimes involving either form of the substance will receive the same sentence. Clinton is expected to discuss her reform plans today in Atlanta.

Until 2010, those incarcerated for possession of crack cocaine were subject to what is called the 100-to-one rule: Simply put, those caught with 50-grams of crack would receive a 10-year sentence. Meanwhile you’d have to be found with 5,000 grams of powdered cocaine to receive the same sentence. The disparity between the sentences was scaled down to 18:1 five years ago through the Fair Sentencing Act, but drug reform activists believe that compromise is still outdated and based on discredited assumptions.

“I’m 100 percent supportive of this decision,” says Anthony Papa of Drug Policy Action to Inverse. “I hope that the 18:1 policy is eliminated because it’s ridiculous.”

This position on cocaine sentence reform is not new for Clinton. In 2007 she co-sponsored the Drug Sentencing Reform and Cocaine Kingpin Trafficking Act, which was not enacted. Eliminating the distinction in sentences between crack and powder cocaine was a key purpose of the bill, says Eric Sterling to Inverse. Sterling is the executive director of the Criminal Justice Policy Foundation and wrote the original version of the bill in 2005.

Sterling, who was Counsel to the U.S. House of Representatives Committee on the Judiciary from 1979 to 1989, wrote the House bill that was the basis of the 1986 law. He says that Clinton’s announcement today is another step in the slow effort to reform the original law, which has been misused by the Justice Department.

“The principal problem here is that the Justice Department took advantage of a mistake that Congress made that it did not have to be bound by,” says Sterling to Inverse, who sees the law as a huge mistake. “In Congress, we were saying that we wanted the Department of Justice to focus on serious traffickers. The goal was to have the DOJ focus on high level quantities, and they failed to do that.”

Sterling says the conversation around crack cocaine sentencing has been full of false assumptions. The difference in prison years between crack and cocaine charges had no basis in any calculations on the relative harmfulness of the different forms of the drug.

“If you look at 90 percent of federal crack convictions, they are African American,” says Sterling. “This is outrageous. Crack is not a ‘black drug’ as has been erroneously claimed. The large majority of crack users have been white throughout its history. But when you see a focus on low level black offenders, you ask, why is this taking place? So many of them are black and they are serving incredibly long sentences, just for a few grams of cocaine base.”

People became aware of this problem more than 20 years ago.

“The U.S. Sentencing Commission looked at what was actually going on, who was being prosecuted and sentenced, and found that overwhelmingly they were low level peddlers,” says Sterling. “It was not the leaders of cartels who were being prosecuted, these defendants were people who were selling drugs on the streets of American cities who could easily be prosecuted by the local police.”

It is against drug kingpins that Sterling believes the federal government should spend its time and resources prosecuting. That is why, in 2005, when he developed the bill that was rewritten and later co-sponsored by then-Senator Clinton in 2007, he gave it the title “Cocaine Kingpin Punishment Act.” He noted that if constituents heard of enactment of another failed proposal from that era, a bill named the “Crack-Cocaine Equitable Sentencing Act,” they would have the gut reaction that their member of Congress was trying to make life easier for crack dealers.

“When the [federal government] goes after 50 gram cases, it is going after a guy who may be making crack and selling it from his home. These are not global traffickers. So instead of focusing on high level traffickers, the U.S. Sentencing Committee has found that the DOJ has spent its time primarily on low level offenders.”

Whether Hillary’s plan to change the ratio to 1:1 comes with a plan to focus on the long sentences of high level dealers — which was the original intent of the Anti-Drug Abuse Act of 1986 and the Cocaine Kingpin Punishment Act — is yet to be seen.

“It would be nice if Secretary Clinton were to think more broadly and say our goal is to have the U.S. enforcement agencies — Justice, Treasury, IRS, Homeland Security, CIA and the military — go after high-level traffickers,” says Sterling. “As President, she could change the behavior of prosecutors, and have the federal government use our highly trained and experienced agents to arrest international level traffickers.”

Anthony Papa, of Drug Policy Action, is also concerned that, while a reform in the way the Federal government deals with cocaine arrests is necessary, there is still much he hopes the next president takes on when it comes to prison reform. Papa was granted clemency and was released from prison in 1997, but says he still carries the stigma of being an ex-felon.

“A huge issue that needs to be addressed is helping people get ready when they are released from prison,” says Papa to Inverse. “The government needs to help get rid of the roadblocks that are in the way of people returning to society — housing, employment, rehabilitative efforts from within prison.”

For now, a 1:1 ratio will hopefully ease the severe racial disparity and the way that the drug war is waged among minority communities. Federal prosecutors, according to Sterling, are working on an automatic pilot as far as management goes.

“We have a situation of glaring racially disproportionate federal prosecutions,” says Sterling, “and it is clear that the leadership of the U.S. Justice Department is not paying enough attention.”