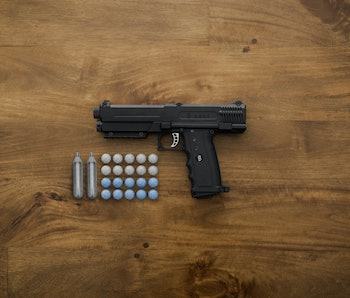 A controversial Indiegogo campaign for a nonlethal “Salt” gun was pulled after barely 24 hours thanks to the efforts of a single outraged San Francisco man leading a Twitter army.

“I’m part of a group of Americans that doesn’t want to get shot,” Mike Monteiro tells Inverse. “I’m unaffiliated, I’m just a dude. I happen to have a large amount of Twitter followers and I try to use them whenever I can. I can’t deal with another school shooting and every time it happens Twitter lights up and then moves on to something else, and last time it happened I thought I’m not going to move on to something else I’m just going to keep driving at this thing.

Monteiro, who runs a design shop, says he first saw the Salt Indiegogo page at roughly 10 p.m. Wednesday night when a friend forwarded it to him. Infuriated at what he saw as yet another attempt to profit from a gun-crazed culture, he alerted his substantial Twitter following of over 54.1k and began messaging Indiegogo. By Thursday morning, the Indiegogo page was gone.

“There’s never going to be legislation for this shit because everyone’s in the NRA’s pocket. Right now the NRA’s a domestic terrorist organization. So if we have to do it ourselves, and maybe if we do it, slowly and methodically, we can chip away until all these gun nuts have their funding gone. I’m sure in the future some kid was going to pick up some stupid SALT gun and shoot his sister accidentally and if that’s been prevented then good.”

The now-removed Salt campaign asked contributors to back a weapon “designed around the belief that a gun does not have to take a life to protect a life.” While Salt looks like a normal handgun, it fires pellets filled with powdered chemicals including an oleoresin capsicum, a ghost pepper extract popular in pepper spray formulas. The pellets strike with the kinetic energy of a well-hurled fastball — strong enough to shock, if not kill — the cloud of chemicals released by the pellets on impact guarantee you don’t have to hit your target exactly.

Salt spokesperson Heath Meyer said the campaign was shut down with just under $30,000 of its $70,000 goal raised. Meyer was notified of Salt’s removal by a reporter, who forwarded him the following explanation from Indiegogo:

“The Salt campaign has been removed because it did not comply with Indiegogo’s Terms of Use. Our Terms prohibit the offering of ‘any weapons, ammunition and related accessories’ as perks. The Salt campaign was offering the product as a perk. All pledged contributions will be refunded to the contributors.”

We’ve emailed Indiegogo and we’ll update when we hear back.

Meyer argues Salt was unfairly penalized, citing successful campaigns for a flashlight that sprays “military grade pepper spray” as well as The Defender project, which promises to mix smart technology with the most potent pepper spray available to law enforcement.

As to the technology itself, Salt CEO Adam Kennedy tells Inverse oleoresin capsicum’s long use by both military and police forces as a non-lethal deterrent has given the company “reams of data” proving its relative safety.

“They were promoting a safe gun, there’s no such thing,” Monteiro says. “It shot a pellet, it’s some rock salt principle with some weird chemical shit so it’s somewhere in line with pepper spray.”

“‘The best weapon is the one you get to use,’ was part of their marketing. With a gun! They were marketing it as a gun,” he says. “I went and looked through Indie terms of use and sure enough a prohibited category is things meant to harm other people.

“I can see a person saying, ‘I’d rather live in a world where weapons never have to be used,’” Kennedy tells Inverse. “I’d like to live in that world too. But that’s not the world we live in. And regardless of Salt, there’s going to be a sea change in the gun debate and if you’re considering the choice of a firearm or this, a Salt gun is going to be statistically far less dangerous than what you see in a firearm.”

Ironically, Salt may be the one weapon to unite both sides of the gun debate. At pro-gun site Bearing Arms, editor Bob Owens took aim at the seemingly paradoxical claim that a weapon that incapacitates intruders is also safe enough to leave around kids.

Owens called the gun “a denial of reality with a profit motive,” writing:

“We know from decades of law enforcement officer use that chemicals fail to have an incapacitating effect against attackers due to natural immunity, adrenaline, alcohol, drugs, or just standard-issue tenacity and will. The product also seems predicated on the hope that their attacker is going to stand still in a cloud of pepper stray that is more than likely going to miss in the first place if the gun even works. (trained law enforcement officers miss more than 80% of the time with handguns under stress).

“These people refuse to deal with the simple fact that the only proven system for dealing with violent criminals is the accurate application of deadly force, and they have created a product to cater to their denial.

Even without crowdfunding, Salt is moving ahead. Company execs say they’ll have an official website up within the next 24 hours, and potential investors’ sources have already contacted them.

“We have a lot of momentum right now,” says Kennedy of the Chicago-based Salt. “I’m not worried. It’s a matter of days not weeks to get a solution in place. We literally have people working on it as we speak. We haven’t announced what it’s going to be but we have a lot.

If they do appear on another crowdfunding site, Monteiro will be ready.

“I have no reason to talk to them,” he says. “I’m not going to convince them. You can’t convince gun nuts that they’re wrong. All I wanted to do was take away their money. I’m sure there’s some rich gun nut funding them now because they’re playing the victim card somewhere. But if it goes back up on Indiegogo, or Kickstarter, or wherever, I’ll go after it again.

“We’re just a bunch of people who are honestly sick of this crap. People are done. We’re done with excuses.”

More like this
Science
6.28.2022 10:00 AM
How are drugs absorbed in the body? The science of medicine, explained
By Tom Anchordoquy and The Conversation
Innovation
13 minutes ago
Robots are ready to get touchy-feely
By Sarah Wells
Innovation
6.29.2022 6:00 PM
Can cars run on water? The science of a TikTok conspiracy theory, explained
By Andrew Moseman
Related Tags
Share: