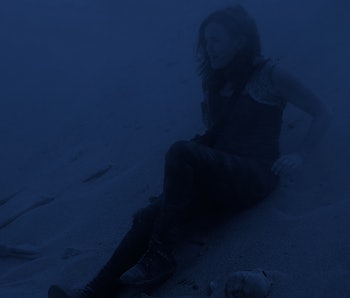 This week’s episode of Marvel’s Agents of S.H.I.E.L.D. ditched the S.H.I.E.L.D. premise in favor of one character’s survival, and it may be one of the best episodes the show ever produced. Forgetting all about S.H.I.E.L.D. tends to be the best thing they can ever do.

Taking place during the six months between last season’s finale and this season’s premiere, “4,722 Hours” sees Jemma Simmons stranded on an alien planet after getting sucked through the mysterious monolith. Of course Jemma finds out she isn’t alone, but “4,722 Hours” is so heavily focused on her and her survival that Elizabeth Henstridge should be commended for carrying the entire 44 minutes. It’s an episode devoted to character meditation, where a character who has long been defined by one other person — Fitz — begins to ponder her place, what her relationship with Fitz really means, and whether she can ever make it on her own.

If you consider yourself a Marvel Universe fan, you know the best thing about the movies aren’t the shiny suits or super powers, it’s character. How these weirdos interact with their world and each other is the real reason Marvel keeps raking in ticket sales. The best thing about Age of Ultron wasn’t Hulk vs Hulkbuster, it was the drunken party where the Avengers try to lift Thor’s hammer. That scene alone got Comic-Con buzzing.

The same almost rings true for their slate of TV — almost. It’s certainly the strength of Marvel’s Daredevil and Agent Carter, and there’s enough to suspect that it will also be true for the upcoming Jessica Jones. But Marvel’s broadcast heavyweight, Agents of S.H.I.E.L.D. had always been weak in its character department, which relied on thin archetypes in the first season. This tainted S.H.I.E.L.D. in ways it still hasn’t really recovered from, but the first master stroke the show performed was when it tied in with Captain America: The Winter Solider — when S.H.I.E.L.D. collapsed.

Stripping Coulson’s squad of resources and letting the assumed heroic male lead — Ward, who was as interesting as a Banana Republic mannequin — become the show’s legitimate bad guy threw Agents of S.H.I.E.L.D. and its status quo in an interesting, unknown space.

It felt similar to Mission: Impossible — Ghost Protocol, which leaves Ethan and his gang to rely on their wits when their ties to the organization were revoked. They didn’t have a safety net, and the urgency brought out the best in the characters.

This urgency came out in full force with “4,277 Hours.” Simmons, who has long been one half of the brainiacs of Agents of S.H.I.E.L.D., had to practically become Tomb Raider to survive six months in (semi-)isolation. She literally had nothing but her phone to get by, and this week’s episode witnessed her — and the show — succeed.