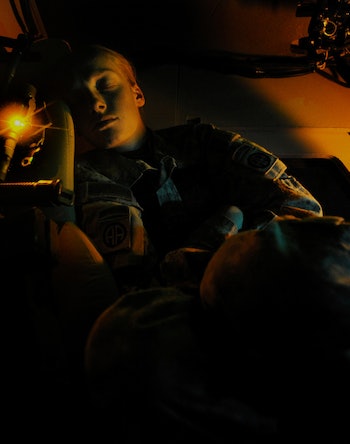 This is an excerpt from an in-depth investigation published in Van Winkle’s by Peter S. Green. To read the full report, click here.

Through the long summer of 2008, U.S. Army Corporal Sean Bedingfield led a fire team at a dust-choked combat operations post in the craggy terrain of Kunar province in northeastern Afghanistan. His platoon was five men short of its full 32-person complement, and would catch incoming fire several times a day from Taliban insurgents in the surrounding hills.

With constant incoming rocket, mortar and small-arms fire, the result was a platoon always on edge, always groggy. “If I could get three, four hours [of sleep] a night, that’d be the most I’d ever see,” Bedingfield, now discharged, said from his home in Fitzwilliam, New Hampshire.

The toll of his sustained sleep deprivation was steep. Coming home with a traumatic brain injury, shrapnel wounds and knee pains, Bedingfield found himself on a laundry list of drugs. He said he was taking Clonidine for blood pressure and suffering residual effects from the anti-malaria drug Mefloquine, which can cause horrific nightmares, delusions and sleepwalking. He was also on antipsychotic medication and two different amphetamines to wake him up every morning.

“It was terrible, absolutely terrible,” Bedingfield said. “Sleep isn’t very much regarded by the Army.” He was discharged with a 70 percent disability in 2012, and the local Veterans Affairs hospital, he says, was unable to help him restore his mental health.

As the longest war in U.S. history drags through its 13th year, America’s armed services are discharging an increasing number of soldiers with serious sleep problems.

The RAND Corporation found earlier this year that 48.5 percent of service members reported such poor sleep quality it would qualify as a “clinically significant sleep disturbance” on the Pittsburgh Sleep Quality Index. With roughly two million U.S. veterans of the wars in Iran and Afghanistan, that means some 900,000 active or retired service members may have significant sleep disturbances or sleep disorders.

“If this was anything else, it’d be labeled an epidemic,” Dr. Vincent Mysliwiec, the Army’s top sleep doctor, told a conference of sleep specialists in Seattle in June. He added, “Insomnia is the signature illness of military service.”

Insomnia is also the hidden wound that America’s warriors are bringing home. It’s largely unnoticed, under-prevented and untreated. It’s the single most important factor, say military sleep researchers, for treating the post-traumatic stress disorders (PTSD) that plague America’s returning veterans, keeping them on meds and out of work, and preventing them from enjoying a normal life.

It’s not a simple matter of prescribing sleeping pills and telling veterans to resume their “normal” lives. Like other shift workers, members of the military frequently exhibit what Dr. Nita Shattuck, the U.S. Navy’s chief sleep researcher, calls “circadian scarring,” a serious, potentially long-term disruption of our natural sleep patterns.

The military indoctrinates healthy American adults into a “culture of sleep deprivation” that persists throughout their careers, says Shattuck, who works at the Naval Postgraduate Center in Monterrey, California. She says that deprivation hampers their performance and creates long-term health problems.

“If you restrict healthy human subjects to four to five hours a night for four or five days, they function at the same level of impairment as if they were legally drunk,” says Dr. Wendy M. Troxel, senior behavioral and social scientist at the RAND Corporation think tank.

Even as Army Surgeon-General Patricia Horoho unveiled a new set of health priorities in 2012, a “performance triad” of sleep, activity and nutrition — changes have been slow to reach the ranks.

Soldiers in war zones must be ready to fight at any moment, but the longer they’re kept on alert without regular, high-quality sleep, the less ready they are to fight.

“As an infantryman, not being able to stay awake is a weakness,” said Bedingfield. He had access to plenty of options to stay awake, including Rip Its, a canned energy drink. If that didn’t work, he said, “you could take the coffee packets from your [meal packs] and put them in your lip, like a dip, and stay awake.”

This abundance of stimulants only makes winding down harder, as soldiers in war zones become hyper-aroused, a state that’s almost impossible to turn off.

“You’re always on guard, always suspicious of anyone coming up to you or next to you,” said Steve Young, a now-retired Army staff sergeant who served in Iraq from 2005 to 2006. “Even when you’re trying to sleep or on rest days, you were always on alert.”

Years later, Young still can’t wind down. At home near Dallas, he now gets four to five hours of sleep a night. He’s battling a career’s worth of injuries, including chronic issues from a parachuting accident and traumatic brain injury from Iraq. “If I can just get to the point of getting enough sleep, I can deal with the body aches and pains,” Young said by phone. “It’s trying to get enough sleep so you’re not jumping at everything that moves.”

The Army is fully aware of the dangers of chronic sleep deprivation. “Abnormal sleep deprivation” was banned in the Army’s 1992 field manual for interrogation. (The manual’s next edition, published in 2006 after whistleblowers revealed U.S. troops tortured prisoners at Iraq’s Abu Ghraib prison — makes no such mention.)

“Fatigue is a weapon,” says Dr. Nicholas Davenport, a retired U.S. Navy captain who introduced the Fatigue Avoidance Scheduling Tool to naval aviators in 2001 while he was the Navy’s chief flight surgeon. “If a commander is smart, he maximizes fatigue in the enemy and minimizes it for his own unit.”

The Navy is actually at the head of the pack when it comes to addressing sleep deprivation and its relationship to performance. John Cordle, a now-retired Navy captain who nearly ran his ship aground when he fell asleep on his feet, is trying to shift the navy from its traditional “five-and-dime” watch (five hours on, ten hours off) to a three-on, nine-off watch system that aligns with the body’s natural rhythm.

Unsurprisingly, change is slow to come.

“At the junior levels, the people who have done it, they like it and will take it with them to their next ships,” Cordle said. But the admirals are harder to convince. “If you are at command level and never saw this before, it’s generally too out-of-the-box to consider.”

The Army has yet to adopt anything similar.

To read this article in its entirety, please visit Van Winkle’s.