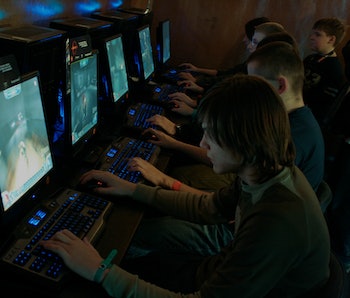 Safety concerns have been cited as the primary reason for the sudden cancelations of two South by Southwest panels within the last 24 hours — a decision that is being critiqued across social media today and led to a boycott of the festival by two prominent media outlets.

To the uninitiated, Gamergate began in August 2014 as #GamerGate, an excuse for men to threaten and intimidate women out of the gaming space on social media. In October 2014, feminist cultural critic Anita Sarkeesian was forced to cancel a talk on the stereotypes of women in video games when an individual allied with Gamergate threatened her venue with mass violence.

Hugh Forest, director of South by Southwest Interactive, announced Monday the immediate cancelation of the panels “Level Up: Overcoming Harassment in Games” and “SavePoint: A Discussion on the Gaming Community,” after saying the SXSW received “numerous threats of on-site violence related to this programming.”

While neither panel was explicitly organized to discuss Gamergate, the later panel featured pro-Gamergate speakers while the former featured women who have specifically been targets of Gamergate vitriol.

In response to the cancelation of panels, BuzzFeed and then Vox Media announced they were canceling their panels in protest.

Sarkeesian called for SXSW to bring back its “Level Up: Overcoming Harassment in Games” panel and straight-up apologize for approving “SavePoint: A Discussion on the Gaming Community” in the first place:

In his statement on SXSW.com, Forrest writes that while the festival had hoped the two panels would “lead to a valuable exchange of ideas on this very important topic” that “civil and respectful dialogue within the big tent” was more important than keeping the discussions.

While the speakers featured on the “Level Up” panel had been in contact with SXSW staff with safety concerns, panel participants have said in the aftermath that they had no intention of ever canceling their talk. One of the prospective speakers had previously been harassed and stalked by Gamergate supporters, reported Motherboard last week when the “SavePoint” panel was approved.

“We had been participating in an email discussing with SXSW about safety for our panelists,” said activist and programmer Randi Harper to Jezebel. “They seemed unconcerned at the time, so this was surprising.”

Robalik responded to the canceled panel by saying “harassment won.”

On Monday, Jones announced on his Open Gaming Society page that he plans on organizing and hosting his planned panel outside of SXSW.

The two canceled panels were not the only SXSW talks that had a connection to Gamergate. Brianna Wu, a developer who has been rigorously harassed by Gamergate, will be on two panels at the March event in Austin, Texas.

Meanwhile, a panel that plans to discuss “the past year of Gamergate related idiocy” hasn’t been affected at all.

Glad to know that when the panel isn’t all women, criticizing Gamergate is all gravy.

More like this
Gaming
19 hours ago
16 best Electric-type Pokémon in Scarlet and Violet, ranked
By Robin Bea
Gaming
17 hours ago
High on Life is 2022's most intriguing shooter
By Steven Asarch
Gaming
November 26, 2022
10 years later, Far Cry’s best villain is just as terrifying as you remember
By Mo Mozuch
Related Tags
Share: