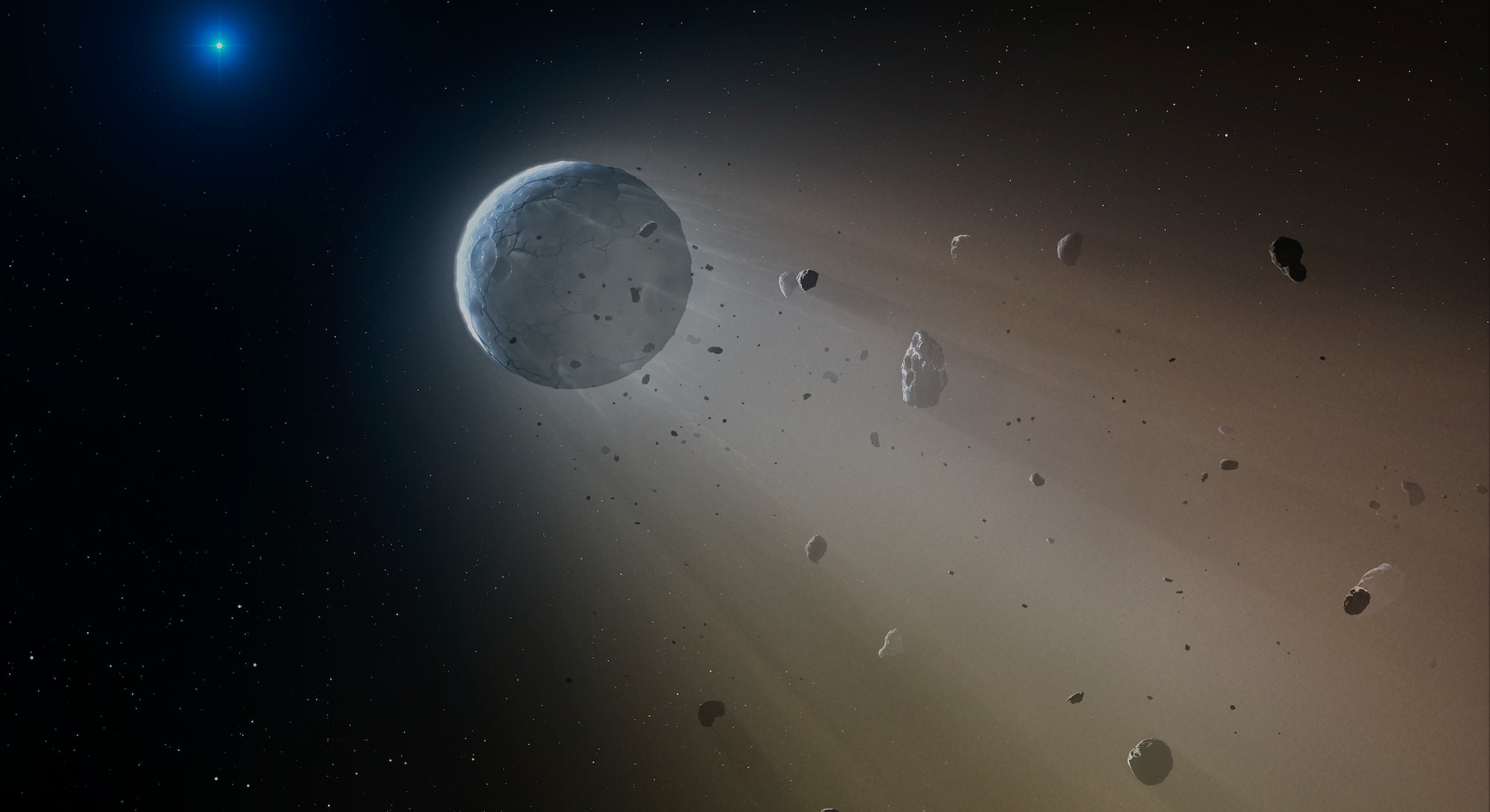 It’s nowhere near as immediate as the laser-zapped destruction of Alderaan, but a distant white dwarf star about 570 light-years from Earth in the constellation Virgo is slowly destroying a planetary object in its orbit, according to a new study conducted by Harvard scientists.

For the first time, “we have caught a white dwarf in the act of destroying one of these minor planets,” says astronomer and lead author Andrew Vanderburg, who studied data gathered from NASA’s Kepler K2 mission.

More than that, the new study also provides what Vanderburg calls a “smoking gun” that clears up the mystery of heavy metal pollution in white dwarf stars — the Earth-sized core of a star at the end of a star’s life-cycle, following the red giant phase.

The K2 mission uses the six-year-old Kepler telescope to collect light and brightness data in order to study stars, supernovas, and nearby objects. When parsing the data, the Harvard team noticed a dip in brightness occurring every 4.5 hours from the white dwarf in question.

A regular, clockwork-like dip in brightness like this almost always signifies that an object is orbiting a star — which makes this the first time astronomers have observed a planetary object transiting a white dwarf. In this case, the object is about 520,000 miles from the star — twice the distance of the Earth from the Moon.

When the team began to make more observations using other instruments, they discovered signs of other large materials (totaling the mass of Ceres) regularly orbiting the white dwarf as well — a cloud of dust similar to a comet’s tail.

A white dwarf is a tiny, ultra hot ball made of carbon and oxygen, but many astronomers have suggested that it also consists of metals like silicon and iron. “Because white dwarfs are so small and massive, and therefore have extremely strong gravity at their surfaces — these heavy elements shouldn’t be there,” says Vanderburg. “If you drop a heavy element like iron onto a white dwarf, it will quickly settle into the interior of the star, where we can’t see it.

“So it was a mystery why these white dwarfs should have heavy elements at their surfaces — they must have been actively accreting them, but from where?

Some scientists posited a theory that suggested this heavy metal “pollution” was coming from nearby planets and asteroids being consumed by the white dwarf they were orbiting. This new system near Virgo seems to confirm that’s the case, with the disintegrating planet being the source of the white dwarfs heavy metal composition.

“Our paper is perhaps the most direct evidence that the pollution of white dwarfs comes from small rocky bodies that accrete onto their star,” says Vanderburg. “It’s excellent confirmation of the established theory of white dwarf pollution, and it opens up exciting new ways to study these objects.

The result is an almost literal “death star” that will vaporize the orbiting planet, leaving nothing but a few bits of metal and rock hanging around a cute ball of hot energy.

Is this happening anywhere else? Vanderburg says almost a quarter of all studied white dwarf stars exhibit signs of heavy metal pollution. “Based on the number of white dwarfs that Kepler observed before it found this one,” he says, “we think that the disintegrating minor planet might be common too.”

This body of research is still in its infancy, and the new study leaves many questions unanswered. “We still aren’t really certain how many fragments are in orbit around this white dwarf,” says Vanderburg. “We also want to study the elements that are on the star more carefully. That will give us a very good understanding of the composition of this rocky planet, and we can compare the recipe used to make this planet to the recipe used to make planets in our own solar system.”