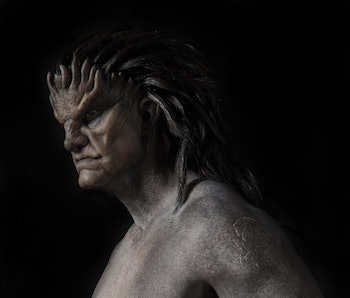 At the end of the teasers for Marvel’s Agents of S.H.I.E.L.D. Season 3, there were ominous, eerie shots of a horned figure against dark blue light that a few people immediately thought was Blackheart, myself included. We were wrong.

I should have known my Inhumans lore better, or paid attention to Access Hollywood because it wasn’t Blackheart at all (nor could it be — the MCU isn’t exploring the underworld yet). Marvel TV’s newest baddie is Lash, an Inhuman who has gone berserk after undergoing Terrigenesis from the Terrigen Mist outbreak at the end of last season.

In the comic books, Lash is a relatively new character, debuted in Inhuman #1 last June. Hailing from Greenland in the hidden Inhuman city of Orollan, Lash was specially chosen for Terrigenesis, an honor not many are blessed to undergo.

In New York City, King Black Bolt activates a Terrigen Bomb that floods the city with Terrigen Mist and awakens the Inhuman genes on an unsuspecting mass populace, including one Kamala Khan, who has embraced her gifts to become the new Ms. Marvel.

Upon the T-Bomb explosion, Lash hunts down the awakened Inhumans — called Nuhumans — to decide whether or not they’re worthy of the gifts. It ends pretty badly if they aren’t.

If you can’t tell by his appearance, Lash is pretty savage in his attitude and methods. He’s formed “The Tribe,” an Inhuman supremacy group that includes such darling individuals like Sheath (a punk with metal shards protruding out of her body), Jack Chain (manipulates Darkforce energy in the form of dangerous chains), Fume (generates combustible, toxic gas), and Nocculus (has a third eye that manipulate people to his will). Real positive role models, all.

Lash has no investment in normal human interests, only to advance those of the Inhumans. One of his newest recruits is Uber Alles, an actual Neo-Nazi and powerful Nuhuman. Discovering that being an Inhuman is the true superior race, he willfully joins Lash’s Tribe and crusade against all.

In Agents of S.H.I.E.L.D., Lash is hunting down Inhumans, awakened by the Terrigen Mist or not. It’s currently unknown if he’s an Inhuman native or a “Nuhuman”, which has not yet been coined in the show. But he is dangerous, powerful, and capable of some hardcore energy blasts.

At the end of last night’s episode, “Devils You Know,” Daisy witnesses Lash morph into a normal, unassuming body but did not get a positive I.D. Lash could be anyone, which is going to make S.H.I.E.L.D.’s job that much harder to find and stop him.