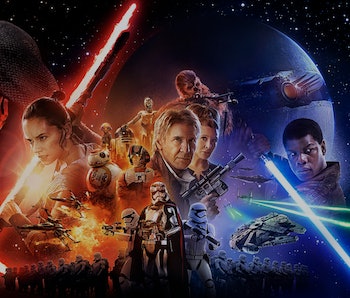 As we told you yesterday, a new poster for Star Wars: The Force Awakens was unleashed upon the world, and geeks everywhere cried out in ecstatic joy.

It’s all part of a big rollout for the final push before the movie is similarly unleashed upon the world in December. While we’re also excited for the final trailer that will debut tonight during ESPN’s broadcast of Monday Night Football, we still think the poster is worth pouring over before it’s on to the next thing.

The artwork sticks to the basic layout of the prequels, featuring a starry black background and characters strategically placed in a sort of action tableau.

Unfortunately, it wasn’t created by artist Drew Struzan, whose work is nearly synonymous with Star Wars. Instead it was art directed by newcomer artist Bryan Morton. Struzan did however create the fan-only D23 art from earlier this year, but it looks like he didn’t want to come out of retirement to make the new one. Unfortunately this makes the new poster look like a Struzan ripoff more than anything.

Besides small looks at the Millennium Falcon, a few X-Wings, and a whole mess of stormtroopers, what else is there to see?