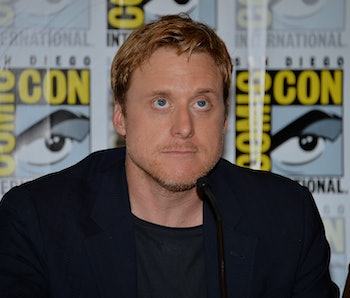 With everyone focused on The Force Awakens coming out in two months it’s easy to forget there is another Star Wars movie coming next year. Details have been scarce about director Gareth Edwards’ spinoff movie Rogue One other than the general plot and a cast photo. We know that it’s a standalone pseudo-prequel about a group of rebels that steal the plans to the original Death Star. We also know that the cast is led by Felicity Jones and features Diego Luna, Riz Ahmed, Ben Mendelsohn, Donnie Yen, Jiang Wen, Forest Whitaker, Mads Mikkelsen, and Alan Tudyk in undisclosed roles. That’s about it for now, but an interview Tudyk gave at NY Comic-Con is the first bit of news we’ve heard about how the filmmakers are going about creating the first non-Skywalker Star Wars movie.

Though he himself is playing a performance-capture CGI character, Tudyk’s comments confirm that most everything around him in Rogue One will be practical. This is the same mentality that J.J. Abrams is going with in The Force Awakens, and it looks like it’ll be the same throughout the new spate of Star Wars stories coming soon.

This is great news for fans who complained that George Lucas’ prequels were nothing but Hayden Christensen and Natalie Portman standing in front of huge green screens. Practical effects make the world on-screen an actual, physical presence instead of being comprised of obviously fake looking CGI environments. It’ll connect these new movies to the beloved original movies, which broke new ground in effects but kept a DIY aesthetic by always using practical sets and environments. We all want these new movies to be more original trilogy than prequel trilogy, that’s for sure.