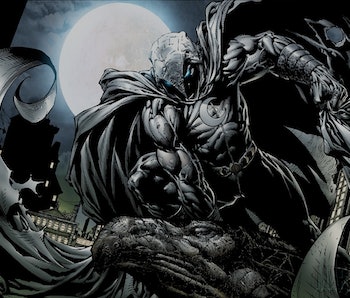 This year’s New York Comic-Con stirred more rumors and speculation than straight answers concerning the Marvel Cinematic Universe. The Inhumans film for 2019 is rumored to have been canceled, as is the Iron Fist series on Netflix. But it’s not all dour news.

On the most recent Collider Heroes, host Jon Schnepp (director of The Death of ‘Superman Lives’: What Happened?) and Vito Lapiccola were joined by Heroic Hollywood Founder and Editor-in-Chief Umberto Gonzalez. Gonzalez brought with him the rumor that Marvel is developing a series for Netflix based on the cult favorite superhero Moon Knight.

Moon Knight, a vigilante blessed with superhuman abilities from an Egyptian god, has long been a Marvel Universe fan favorite. I speculated a few months ago that Moon Knight would be as great a fit as a series than a movie for no other reason than it just is. Daredevil did much to set the archetype for Marvel’s gritty TV, and Moon Knight’s premise just works better than a Hulk-sized movie. Let me live in the delusion that important people at Marvel are reading my work.

If the rumor is true, it will still be awhile before we see even a confirmation of Moon Knight on Netflix. After next month’s Jessica Jones will come Luke Cage and Iron Fist, though the certainty of that project remains in question.

More like this
Entertainment
8.5.2022 7:00 AM
The Sandman is Netflix’s first great comic book adaptation
By Mónica Marie Zorrilla
Entertainment
4 hours ago
The Midnight Gospel creator has “no hard feelings” over Netflix cancellation
By Jake Kleinman
Culture
8.2.2022 11:30 AM
You need to watch the greatest Marvel movie ever on Netflix ASAP
By Alex Welch
Related Tags
Share: