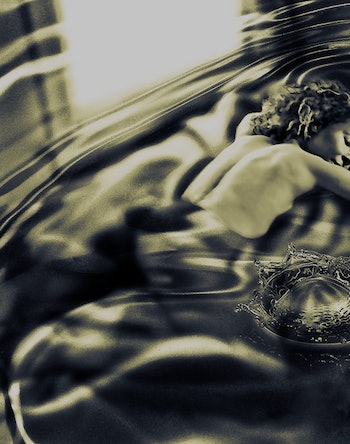 When I was 18, I had a dream one night that really stuck out to me. I was walking around on the surface of Mars — or at least some sort of planet caked in red rocks and dust. I wasn’t wearing an astronaut’s suit; the air was plenty breathable, although there was a tinge of reduced gravity, and my steps had a nice buoyancy to them. The sky was inexplicably purple, and the landscape was sparsely dotted with wilting palm trees.

I remember seeing a big tower in the distance — like the Burj Khalifa skyscraper in Dubai before it was actually completed — and wanting to get up there to see the top, which seemed impossible. So I wished for a pair of hoverboots on my feet (the kind that would let me jet off into the air like I was Iron Man). In the blink of an eye, I had flames coming out of my feet, and I was blasting off the ground towards the top of the mile-high tower.

This wasn’t a surprising dream for me. I had chosen all of this because I was lucid dreaming. Just a few moments before I found myself on Mars, I was having some mundane experience about being on Earth. I didn’t want that, so I changed things in an instant — teleporting to a new world, and having a brand new, unreal adventure.

During my teenage years, almost all my dreams were lucid dreams, and this Mars adventure was no different. Not only was I aware I was dreaming, but I could control and experience whatever it was I wanted to. Dreams, during this time in my life, were a world I had total agency over — perhaps the only part of my life I was in complete control over. And it was the mere fact I knew I was dreaming that gave me control over things. I never felt at the mercy of my own subconscious.

To top it off, I found my dreams to be exceptionally vivid and memorable. I would wake up refreshed, excited, and confident about the day — a bit disappointed the dream was over, but overall feeling great about what was next. On bad days, I could always look forward to going to sleep and dreaming as a reprieve from reality.

The key to opening this literal dream world, for me, was meditation.

When I was 15, I began to mediate regularly every night before going to sleep, a way to clear my head and find some peace before hitting the hay. I wasn’t trying to induce lucid dreaming, but after several weeks, I found that the majority of my dreams were lucid.

My meditation technique was simple: sit upright on the ground, legs crossed, and hum “om” for several minutes (first quietly, then silently) while emptying my mind of all thoughts. At some point, I would feel relaxed enough that I could go back to lying down on my bed, fall asleep within minutes, and before I knew it, REM sleep had kicked in with a lucid dream to boot; or I would lucid dream on the tail-end of my sleep cycle, when REM sleep was on its outro phase.

I was experiencing what’s called a Wake Induced Lucid Dream, or WILD, where a dreamer moves directly from a normal waking state into a dream state, and almost immediately knows he/she is dreaming. This is in contrast to a Dream Induced Lucid Dream (DILD), where a dreamer enters a dream normally and at some point figures out that they are, in fact, dreaming. The two approaches are pretty different from one another. Since I’m used to WILD, this post will focus on that and save DILD for another day.

My technique for initiating a WILD was a variation of “dream yoga,” practiced by some Buddhist monks. Labels aside, the goal for jumpstarting a lucid dream via meditation is the same: emptying your mind of thoughts and feelings, controlling your breathing to a slow, resting pace, and inducing a state of sleepiness not of exhaustion, but of total relaxation. You might have your own way of meditating — perhaps by lying down, or concentrating (or not concentrating) your mind in different ways, or using a different mantra — but the end effect should be the same.

You might start to notice signs of hypnagogia (the state of consciousness between wakefulness and sleep), in the form of weird colors and shapes, strange objects, and perhaps even sounds or physical sensations. You should try to keep focused on these things and interact with them. Noises, flashes of light, or physical movements from the real world might still be noticeable. Try not to let those things shake you awake or interrupt your process.

Lucid dreaming varies greatly each time, and so from here, two different things might happen. From my experience, my body would usually drift off into a full-on dream state, although I would be fully aware I was dreaming. Of course I would still retain some degree to control things as I wanted to, but I was usually left to play with visuals and settings that had already been dumped before I arrived.

The other, much rarer thing to happen, was that I might get the chance to basically build my own dream from scratch, including the setting, the people in the dream, my own appearance, etc. If I wasn’t thrilled with it, I could wipe it all away like an eraser to a white piece of paper and start over.

In either instance, you’re much more likely to remember your dream when you finally wake up than you would otherwise.

Lucid dreaming isn’t simply a neat thing to experience. Lucid dreaming can also act as a form of therapy. Having control over your dreams may be a valuable form of escapism during stressful periods in your life. In my experience, my sleep regimen was better — I didn’t wake up as often, I didn’t need as many hours in bed, and I felt I had more energy when I woke.

I haven’t had a lucid dream in years. I stopped meditating soon after I got to college, where my hectic schedule and my alcohol and coffee intake prevented me from maintaining a normal sleep routine. Once the meditation stopped, the lucid dreams fell off as well.

Writing this now, however, reminds me that I was lucky enough to find a way into lucid dreaming, and that it probably wouldn’t be so difficult to return to that state once more. It would probably require me to cut back on coffee and beer, and to set aside more time for rest. But the benefits would probably pay off. At the minimum, a nightly dose of meditation couldn’t hurt.