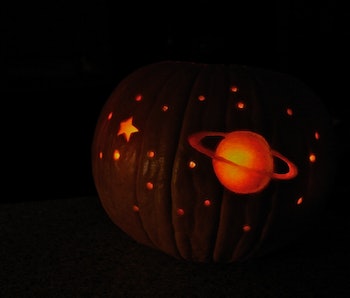 Like our collective thirst for spiced lattes and Halloween costumes on the raw edge of relevancy and taste, our pumpkins just keep growing. The greatest of great pumpkins are well over the ton mark, and hitting a 3,000 pounder is a safe bet in the next two decades. But let’s say that’s not enough. Let’s say mankind’s autumnal ambitions are to create something bigger still. Well, we’ll have to look to the stars.

“An interesting experiment to get at the question of theoretical maximums would be to grow giant pumpkins in space where neither season nor gravity are concerns,” James Myers, a plant breeding expert at Oregon State University. The limiting factor, Myers suggests, wouldn’t be weight or density — big pumpkins, like stars, implode — but gas diffusion, the maximum speed at which plant leaves, roots, and stems can suck carbon dioxide through their pores. Though plants are good at transporting liquid, each part of a plant handles its own carbon dioxide exchange so growing the parts beyond their earthly limits might affect their efficiency.

Myers theory of maximum pumpkin would obviously be a rather expensive hassle to test. But maybe not impossible. Gravity does mess with plants’ roots, but a “skew” results in them moving away from the gourd in only one direction before beginning to wander aimlessly. In other words, space planting is very possible. As University of Florida botanists — who studied the plant Arabidopsis in orbit — recently wrote at the Conversation, in the absence of gravity, plants look to different environmental factors to take their cues: specifically, light. “Other genes involved with light-sensing — normally expressed in leaves on Earth,” they pointed out, “are expressed in roots on the ISS.”

Though the root patterns end up slightly different, and the gene expressions change, the space plants are still fundamentally the same, which is to say edible. Last year, NASA launched its project Veggie on the ISS, having sent the system off planet via SpaceX. A combination of red and blue LEDs, root mats, and nutrient-rich “pillows” provided all the growing materials for romaine lettuce seeds; NASA, cautious as ever, ran a battery of tests to make sure the lettuce was safe to eat and allowed astronauts to munch on the fruits of their labor for the first time this summer. The reviews were stellar and indicative of the plants functioning more or less as usual.

But not just any plant is going to go to space and expand. That’s not one of the properties of extraterrestrial farming. So, anyone attempting to supersize a pumpkin is going to need the right seeds.

“There are a couple of single gene traits that might lead to larger and heavier pumpkins,” says Myers. “One is a gene that causes lignification of the rind (it’s usually associated with wartiness and you have most likely seen it in ornamental gourds). It has not traditionally been used in giant pumpkins probably because of cracking issues. If it could be bred so that lignification does not happen until after the pumpkin has reached full size, then it might provide additional structural support for larger fruit size.”

Because the pumpkin won’t collapse, it can be lighter than its earthbound brothers. But it will also be uglier, and a weird color.

“A second gene is the precocious yellow trait,” explains Myers. “I am sure that you have seen bicolor gourds: half yellow and half green. These are heterozygous for precocious yellow and homozygous fruits are fully yellow. This gene is associated with increased rind thickness, so it might be a way to make pumpkins heavier but without actually increasing size.”

Pumpkins in space don’t have to worry about pests, vandals, seasons, or other earthly horrors. What they do need in space is space. You’re going to have to clear out a good 20 feet for the vine to grow — though the International Space Station, with a little deck-chair rearranging, would be fairly well equipped for this sort of research, as it sports over a hundred research stations the size of telephone booths.

The biggest problem with planting giant pumpkins in your space garden is that these are not your efficient cereal crop. Pumpkins are thirsty: A hundred-pound pumpkin can gulp down 20 gallons of water every four days, and, according to South Dakotan legend, a gallon of milk for calcium. The ISS recycler produces about 4 gallons of water a day, so you’d have to tap into the 530 gallons in reserve. And here’s where it becomes an ultra-expensive hobby. At about $2,000 or $3,000 a pound per item transported to space, and 8.3 pounds to a gallon, that’s a half a million bucks for your water bill a week.

But who, really, could put a price tag on a hideously oversized decorative extraterrestrial Halloween decoration?