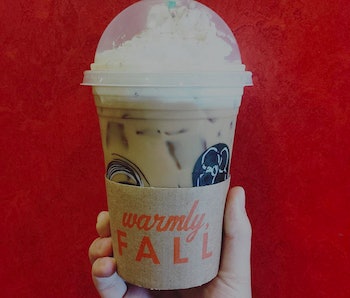 Like dogs to Pavlov’s bell, the middle class reacts to the slightest hint of autumn chill by drooling over the Pumpkin Spice treats arriving on chalkboard menus in coffee shops nationwide. When it comes to fall flavoring, pumpkin is king, and there’s no escaping its tyranny. But American taste buds have weathered food trends before. Will pumpkin’s despotic reign ever end?

Probably not anytime soon, by the looks of it. Last year, American consumers bought $361 million worth of pumpkin-flavored products. And we’re not just talking lattes: In addition to the usual baked goods and pie fillings, pumpkin has managed to make its way into (awful) beer, toothpaste, yogurt, and dog food. Sales of pumpkin-flavored goods have risen 79 percent since 2011, not even ten years after Starbucks debuted its infamous #PSL.

Back in the 1900s, James Dole invented a machine that canned 100 cored, peeled, and sliced pineapples a minute, giving birth to a pineapple craze that lasted through the 1920s in the form of maraschino-jewelled upside-down cake, then considered the height of culinary elegance.

And, as more American households installed refrigerators in the 1920s, Jell-O’s popularity rose. There seemed to be no end to the number of things you could do with wiggling aspic. Through the middle of the century, home chefs attempted everything from suspending vegetables to congealing coleslaw within Jell-O’s crystalline walls. It took until the ‘70s for Americans to come to their senses — at which point Jell-O famously hired Bill Cosby to boost lagging sales.

Even the Sex and the City-inspired cupcake trend eventually died, ground to death by a thousand straining pumps. Which is to say that trends are not timeless. It is the rare trend that becomes a tradition. Is pumpkin that exception to the rule?

Well, pumpkin is a special case. Pineapples and Jell-O were arbitrary in the sense that they had no cultural meaning before they came along. The pumpkin-autumn association, on the other hand, has been embedding itself into American consciousness ever since the Pilgrims stepped off the Mayflower. For most food trends, the relevance of the trigger — like Sarah Jessica Parker’s cupcake binges at Magnolia Bakery — can dictate the shelf life of the related food trend. Soon enough, the refrigerator’s novelty wore off. Pineapples became plebeian.

But Autumn is gonna Autumn.

In this sense, Starbucks and the rest of the pumpkin bandwagoners made a brilliant marketing move. Instead of creating entirely new associations for consumer minds to adopt, they simply took an existing one — one with an annual trigger — and made sure we’d never forget it again.

Last year, sales of pumpkin-flavored dog food amounted to almost $13 million. When the scent of falling leaves are in the air, do dogs look forward to their annual squashy fix? If they’re trained half as well as their ever-obedient owners, there’s no doubt they do.

More like this
Science
7.30.2022 7:00 PM
The latest deadly threat to polar bears? Your trash
By Thomas Scott Smith and The Conversation
Mind and Body
7.30.2022 2:00 PM
Why does eating pineapple sting? A food scientist explains the chemistry
By Elana Spivack
Science
8.7.2022 9:00 PM
Scientists now know how likely you are to be killed by space junk
By Monica Grady and The Conversation
Related Tags
Share: