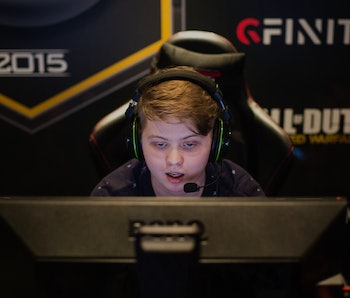 Professional video gamers want to unionize and, last Saturday, they took the first step in that direction. While the idea tabled by Na’vi CEO Alexander Kokhanovskyy isn’t the real “union” players and fans have long hoped for — it’s more of a set of demands to tournament organizers — it’s a start. Among the teams’ grievances against their quasi-overlords: The current system makes it hard to rest before competitions. As it turns out, that could be a serious problem for a potentially $2-billion industry.

Writing on behalf of several major eSports teams, Kokhanovskyy called for “more professional connection” and enumerated a list of demands to major eSports organizers, including ESL, MLG, Starladder, and FACEIT. The letter requested (forcefully) that players be given access to a lounge with food, private bathrooms, decent hotels, and per diems. On top of that, teams are asking for “equal conditions to all teams participating” with equal warm-up and rest time.

Proper sleep is an overlooked but necessary part of eSports competition. Even on a normal day, eSports players can get as little as four hours of sleep in between dozens of hours of practice. Besides exhaustion, sleep deprivation for a pro gamer is hazardous, potentially fatal, frying their brains in ways even traditional pro athletes don’t.

Inverse spoke about competitive gaming’s way forward with Dr. Michel Bornemann, the director of sleep medicine at Olmsted Medical Center in Minnesota and the lead investigator at Sleep Forensics Associates, a legal and law enforcement consulting firm specializing in sleep-related cases. An avid gamer himself (“I’m absolutely enthralled,” he says of his PlayStation 4 and Hearthstone), Dr. Bornemann agreed that sleep and gaming make complicated bedfellows.

For one thing, Dr. Borneman pointed out that games produce intense blue wavelength light that suppresses melatonin, a brain neurotransmitter that starts the sleep process. That means segueing from first person shooting to first person snoozing is tough. He said he spoke from personal experience.

“You can’t condition yourself to get less sleep,” Dr. Bornemann explained. “You probably have friends and colleagues who believe that they can get on with five hours of sleep and do perfectly fine. That’s not the case.” Humans are genetically hardwired to sleep between ten at night and midnight until six and eight in the morning, and any deviation from that is going to come with repercussions.

An uneven distribution of prep time for teams is currently making eSports tournaments uneven. Many teams compete from around the world — often in Europe, Asia, and North America — and travel across timezones. Upon arrival, they are given varied amounts of time to rest. Whether organizationally or just speculatively, timezones are factored into the way analysts consider other professional competitions, but it is almost entirely ignored in eSports. Dr. Bornemann eluded to a German research project that revealed a deterioration in conjunction with how many timezones were crossed. The magic number was three: “If somebody covers three time zones or more, the team that’s the home team has a statistical advantage.”

Dr. Bornemann argues that “to even the playing field, you have to include acclimatization for the travel team and the number of timezones that they’ve covered.”

A sleep-deprived athlete is at an obvious disadvantage, but it’s reasonable to wonder if the same is true of gamers, who run considerably less. The major problem isn’t physical exhaustion, it’s attention, or the lack thereof. Dr. Bornemann describes experiments on sleep-deprived patients who are unable to respond to coded signals, an example of errors of omission. “In a gaming situation, you can have elements of a game that are happening so quickly that you just don’t respond. You’re just not in the cognitive situation to respond effectively.”

Other consequences of deprived sleep are errors of commission (“How often do you hear that individuals are shot in friendly fire? A vast majority of these are associated with fatigue, if not sleep deprivation”), micro-sleep which results in “head-bobs” (anyone who has ever dozed off in lectures has done this) and delayed reaction times. For gaming, these all boil down to one thing: a compromised performance.

“These are all going to be the difference between winning and losing. These are very rapid response games that require optimal cognitive response and fine motor skills. You have to be at optimal performance and sleep deprivation is everything but that.”

Zero sleep isn’t just bad for play, it’s bad for health. The human brain isn’t fully developed until age 25; the typical age of a pro gamer is 22 or 23. And while video games have done much to sharpen “development of executive function” and “fine motor skills” at high levels of rapidity and problem solving, according to Dr. Bornemann it means bunk when the player isn’t sleeping. Sleep-deprived teenagers and young adults gaming until 3 a.m. exhibit the sort of health problems associated with your average 50 year old.

“High blood pressure, diabetes, these are things that are common ailments in middle age. This is not what you would expect to see of someone in their early 20s, but we’re starting to see that in this age group. Part of that is associated with sleep deprivation, whatever the cause of sleep deprivation might be.”

Disciplined sleep has entered pro sports only recently, but Dr. Bornemann says all it takes is evidence. “We see this with the Seattle Seahawks. We’ve seen this with the Boston Celtics. They recognize that this is not only important for health, but it’s important for optimal sports and athletic performance.” Sadly, the motivation to act isn’t so altruistic. Even in pro sports, evidence isn’t based upon athlete health.

“Nobody does anything in sports necessarily for the well-being of the athlete,” says Dr. Bornemann. “It’s done based upon winning. When you can show a competitive advantage, that’s when you see everyone else doing things.”

More like this
Innovation
8.12.2022 9:30 AM
Indoor lights make us sick — this technology could fix that
By Miriam Fauzia
Entertainment
15 hours ago
Rings of Power Season 2 will feature a fan-favorite character Peter Jackson snubbed
By Alex Welch
Entertainment
12 hours ago
The one incredible Marvel movie you need to watch before She-Hulk
By Dais Johnston
Related Tags
Share: