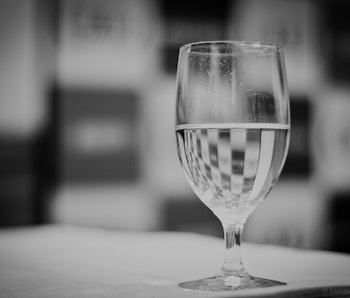 The glass question is a personality descriptor as common as “What’s your Myers-Briggs type?” or “Are you Type-A or Type-B?” It tells people if you’re more likely to notice the rainbow after the storm or if you’ll just focus on the cold downpour. But it turns out that the way you see the glass of water — half empty or half full — isn’t necessarily up to you per se.

The folks at AsapSCIENCE broke down the (ahem) science behind the water glass this week, showing that you may be genetically susceptible to your emotional perspective on life.

On genes controlling for serotonin (the neurotransmitter that accounts for stuff like happiness), people with two long alleles would probably be more positive than those with a short allele on the same gene.

Additionally, oxytocin receptors might be a factor in your outlook on life. If you’ve got a pair of guanine nucleobases, you might have higher self esteem than your friend with a pair of adenine.

Beyond how your brain is hardwired to emotionally recognize different stimuli, AsapSCIENCE looked at the kinds of effects that optimism and pessimism can have on your life.

For example, optimists are more likely to excel in academics and end up with a better socio-economic status. However, thanks to their cheery outlook on life, optimists tend to overestimate themselves and sometimes engage in risky behaviors.

Pessimists shouldn’t let that get them down. They’re more likely to be realistic and exercise caution towards things like finances, health, and the general future. Thanks to that extra dose of realism practiced in everyday life, pessimists might even live longer. Go figure.

We’ll let them take it away.

Next time you’re guzzling coffee at your desk, know that your opinion on whether you’ve still got half a cup left (yay!) or you’re already down half mug (boo!) is at least partially determined by science… and how many TPS reports are burning a hole in your memo tray.