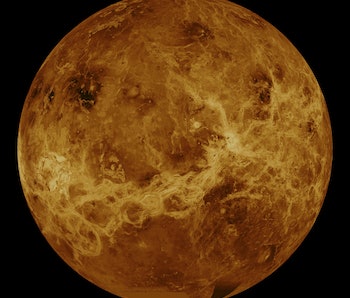 The excitement from the discovery of liquid water on Mars has yet to die down. But without even having successfully landed a human crew on the surface of the red planet, NASA is already making plans to move forward with exploring other objects in the solar system.

The agency just announced five new scientific investigations it will be refining in the next year. One or two will be chosen for flight opportunities as soon as 2020.

NASA plans to allocate $3 million to each investigation as part of its Discovery Program, and task teams with continuing to develop concept designs and analyses for each potential mission. By next year, NASA plans to make final selections for which investigations will turn into official missions.

That means $9 and $12 million in funding that doesn’t lead to an actual mission. It’s important to remember, however, the work that goes into these investigations won’t be all for naught. NASA is very efficient in finding uses for all of the research it conducts and data it collects. Even if those conceptual designs and plans will never be realized, that information will, at some point, inform the way NASA scientists go about in planning and designing another mission in the future. That’s precisely what’s happening with the current development and testing of the Orion spacecraft and its upcoming missions, which absorbed the now-defunct Constellation mission program.

Without further ado, here are the five investigations that could potentially turn into new space explorations in a few years:

The first of two different Venus investigations, DAVINCI would study Venus’ atmosphere during a 63-minute descent onto the surface. The obscenely harsh chemical composition of the air means we know very little about the planet’s surface, and hopefully DAVINCI would finally give some insight about how the air interacts with the surface.

Perhaps this might be partly related to the development of heat- and pressure-resistant microchips some companies are developing for NASA? Who knows?

The second Venus investigation proposes a more comprehensive study of the planet from above the surface, using high-resolution imaging.

Psyche refers to the metallic asteroid of the same name, which is thought to be a remnant of an ancient protoplanet that was destroyed in a collision with another massive object long ago. NASA is also ramping up ideas about how to better study asteroids (and potentially mine them for water), and a mission to explore Psyche would fall right in line with that work.

NEOCam would serve as a new way to discover near-Earth objects — 10 times better than what space agencies around the world currently use.

You’ll love this one: Lucy would be the first reconnaissance mission to explore the Jupiter Trojan asteroids, a large group of asteroids that share Jupiter’s orbit. Little is known about these buggers, but they could provide a lot of new information about the origin and history of the solar system.