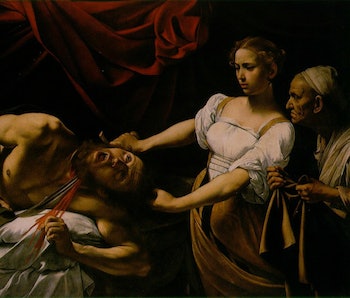 Remnants of a 9,000-year-old beheading were recently uncovered in Brazil, revealing just how far back humans have been cutting off each others’ heads.

The skull found at the site, known as “Burial 26,” had two dismembered hands crossed over its face, suggesting a sort of ritual, non-punitive decapitation had taken place after the individual died. Not all beheadings were so benign. Over the millennia, decapitation has represented honorable deaths, spiritual rituals, capital punishment, and revenge killings, and its bloody history continues today.

Before the Brazilian find, the oldest known beheading had taken place at a site called Asia 1 in Peru, within the “footprint” of known beheadings in the New World. (Burial 26 was especially surprising because it occurred well outside this range.) Researchers had found three bundles of eight heads, together with pendants, necklaces, and red pigment — as well as two headless bodies — leading them to think the beheading had been part of a spiritual ritual.

For the Arara Indians in the Brazilian Amazon, beheading had slightly less spiritual significance. Enemy skulls weren’t just war trophies, mounted on top of poles — they were also used as instruments. And the Munduruku Indians in northern Brazil took the rituals surrounding trophy skulls to the next level. Disembowelled enemy heads would first be boiled in oil and smoked, then the mummified head was tattooed and decorated in community rituals in acts of “belligerent superiority.”

It isn’t clear how or when beheading originated in Europe, but when it was introduced, it spread fast. In ancient Rome and Greece, if you had to die by capital punishment, beheading was a much more honorable way to go compared to other methods, such as crucifixion.

William the Conqueror is thought to have brought Roman-style beheading to Britain, reserving it as a noble death for people of noble birth. The precursor to the guillotine, known as the “Halifax Gibbet,” is thought to go back as far as 1280.

The last person to die by beheading in Britain was Simon Fraser, Lord Lovat in 1747.

Ancient samurai followed the code of “seppuku” — ritual suicide to avoid a dishonorable death at the hands of an enemy. Warriors would first self-inflict a wound to the abdomen, and then an assistant would strike the final blow to the neck.

Decapitation was later used as a form of capital punishment. In a particularly cruel variant, victims were buried in the ground up to their necks, and their heads were cut off with a wooden saw.

Despite its crucial role in the French Revolution and its apparent namesake, Joseph-Ignace Guillotin (1738-1894), nobody’s really sure where the first guillotine came from. Some accounts trace it back to Ireland as far back as 1307.

Of course, the French made the most efficient use of the new technology, which was thought to be more humane because decapitation by hand occasionally needed more than one ax stroke.

The guillotine was an official Nazi state method of execution under Hitler’s reign, used to kill 16,500 opponents of the Third Reich and political dissidents between 1933 and 1945.

As the videotaped beheading of journalist James Foley by ISIS terrorists sadly illustrates, the practice is still very much alive today, albeit illegally. Today, the only country that still officially counts decapitation as a government-sanctioned method of execution is Saudi Arabia.