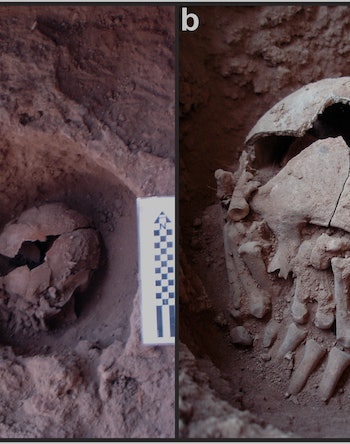 Scientists believe they have discovered the earliest known instance of decapitation in the “New World.”

At a site called Burial 26, a mass grave in Brazil, an international team of researchers unearthed a skull they believe to be 9,000 years old that had been removed from a human body after death occurred.

The arrangement of the skull also featured two severed hands placed over it in “opposite directions,” a clue that led researchers to believe the skull was removed as part of a funerary ceremony.

Based on the scoring of the bones, researchers ruled out the possibility that the decapitation was punitive in any way. Instead, they attribute the decapitation to “mortuary rituals among hunter-gatherers in the Americas.”

The discovery “opens a window to the mysterious cosmology of the first human peopling of South America,” says Jean-Jacques Hublin, director of the department of Human Evolution at the Max Planck Institute for Evolutionary Anthropology in Leipzig, Germany, “and provides us with a rigorous record of their amazing funerary practices.”

While this doesn’t rule out earlier instances of making heads roll, it does place the practice of decapitation much further back in the human timeline than previously thought, and also 2000 kilometers further outside the “footprint.”

“During the early Holocene, [decapitation] was not a phenomenon restricted to the Western part of the continent as previously assumed,” says Andre Strauss, a researcher at the Max Planck Institute for Evolutionary Anthropology and lead author on the paper.

Prior to the discovery, the oldest-known instance of decapitation occurred in the Andes region 5,000 years ago, a remarkable displacement in time.