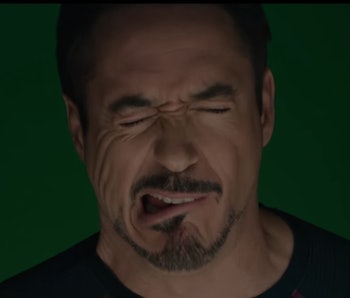 Just to remind you that Avengers: Age of Ultron hits home video soon, the good folks at Marvel have released a brief new clip of the gag reel from their tentpole sequel.

This is the second gag reel clip they’ve released on YouTube, and the whole shebang will be among the special features of the Blu-ray when it’s released next month. You can watch the first clip here.

It’s not the best gag reel ever — most of the yuks are between the people in the movie as opposed to any that will come from the people watching the video — and it’s mostly there to show everyone how much fun it was to shoot the sixth highest grossing movie of all time. This is a good thing for Marvel since Joss Whedon didn’t really have much of a good time making it, but it looks like the millionaires in the movie had a blast.

We’re certain all of the flirting between Cap and Iron Man was left on the cutting room floor for a reason. It would’ve been a particularly confusing subplot when the two go head to head in the upcoming movie Civil War.

Be on the lookout for all the behind the scenes superhero hijinks when the Avengers: Age of Ultron Blu-ray hits on October 2.