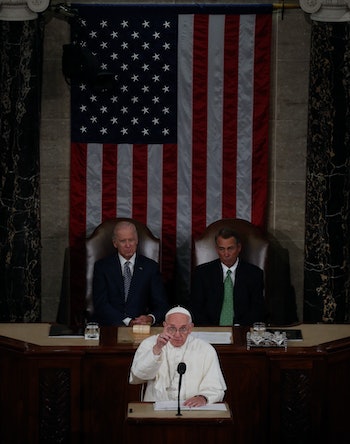 For the first time in history, a pope delivered a speech before Congress. Pope Francis received thunderous applause on entering the chamber and declaring he was “in the land of the free and the home of the brave.” It was a congressional address that overfloweth with respect for human dignity (invoking the golden rule also gets applause in Congress) and with respect for climate science.

It was also an address that will be tough for some hard-line Republican Catholic legislators to stomach, and presumably too much to take for Catholic Representative Paul Gosar (R-Arizona) who boycotted the speech; in a proud dick-in-the-communion-wine move, Gosar declared on conservative outlet Townhall that it would have been better for the pope to focus on the sanctity of life rather than the sanctity of the planet. (One gets the impression Gosar skips the bits in Genesis that are bogged down with Noah’s animal-loving hippie ideology.)

But had Gosar been in the Capitol on Thursday, he would have heard Pope Francis’ eloquent call not only to action on the environment but also to American liberty and justice as practiced by Abraham Lincoln, Martin Luther King, social activist Dorothy Day, and pacifist monk Thomas Merton.

The Pope did, of course, hit his climate change talking points:

“It goes without saying that part of this great effort is the creation and distribution of wealth. The right use of natural resources, the proper application of technology and the harnessing of the spirit of enterprise are essential elements of an economy which seeks to be modern, inclusive, and sustainable. Business is a noble vocation, directed to producing wealth and improving the world. It can be a fruitful source of prosperity for the area in which it operates, especially if it sees the creation of jobs as an essential part of its service to the common good. This common good also includes the earth, a central theme of the encyclical which I recently wrote in order to enter into dialogue with all people about our common home. We need a conversation which includes everyone, since the environmental challenge we are undergoing, and its human roots, concern and affect us all.

In Laudato Si’, I call for a courageous and responsible effort to redirect our steps, and to avert the most serious effects of the environmental deterioration caused by human activity. I’m convinced that we can make a difference, I’m sure, and I have no doubt that the United States — and this Congress — have an important role to play. Now is the time for courageous actions and strategies, aimed at implementing a culture of care and an integrated approach to combating poverty, restoring dignity to the excluded, and at the same time protecting nature. We have the freedom needed to limit and direct technology, to devise intelligent ways of developing and limiting our power, and to put technology at the service of another type of progress, one which is healthier, more human, more social, more integral. In this regard, I am confident that America’s outstanding academic and research institutions can make a vital contribution in the years ahead.”

With the enthusiasm of a man driving demon pigs off a cliff, the pontiff has been going hard on climate change. Speaking before the White House Wednesday, Francis echoed not only his papal encyclical released earlier this year, but also the words of Martin Luther King, saying “we have defaulted on a promissory note and now is the time to honor it.”

More Pope: The Makers of the Popemoji Aren’t Trying to Convert You