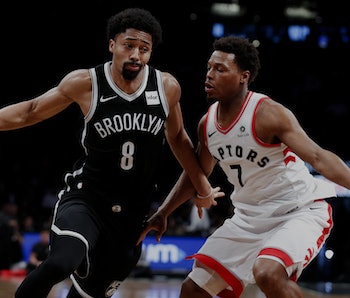 Brooklyn Nets player Spencer Dinwiddie might just take the NBA into the world of blockchain. He has been negotiating with the organization for months, and he just announced he’s moving forward with part of his plan to tokenize his $34.36 million three-year contract. He plans to sell 90 tokens for $150,000 each to accredited investors, which would mean he’d be able to cash in on his salary early. That amounts to $13.5 million of his contract.

The NBA has been hesitant to agree to this deal, as it has claimed this could violate its collective bargaining agreement, but Dinwiddie just launched a digital investment vehicle to sell the tokens, so things might be happening. Dinwiddie tweeted on Sunday that his efforts could open up this opportunity to others after a fan tweeted at him that they’re excited to invest.

“I can’t wait to have a Reg A offering as well,” he tweeted. “The hoops we have to jump through now Make the process cumbersome. NDAs, KYC/AML, Accredited investors, cross reference with other approved lists etc etc. but soon we will have it for ALL! I promise.”

The NBA issued a statement on Thursday that seems to indicate nothing is set in stone quite yet.

“Spencer Dinwiddie’s advisors provided us today with new information regarding a modified version of their digital token idea, which we are reviewing to determine whether the updated idea is permissible under league rules,” the league said.

The coin would pay out 4.95 percent base interest on a monthly basis, which makes it a great investment, assuming everything goes according to plan. That said, there’d be no payout until the end of the contract on February 10, 2023.

David Yermack, a professor of finance and business transformation at New York University, tells Inverse this idea actually isn’t really new. He says the only thing that’s new about it is that it relies on blockchain, but that’s not a huge development.

“What you’re looking at here is an application of what we call securitization, where a risky cash flow is sold into the market and spread among many people who are better risk bearers,” Yermack says. “The blockchain only matters if it’s difficult to keep track of these things.”

Yermack says this idea is reminiscent of when David Bowie started selling “Bowie bonds” to people that were based on his future earnings. He says many recording artists have replicated this since.

“It essentially passes the risk of the popularity of the artist onto the market,” Yermack says. “I think the league’s concern about this is very obvious. When you don’t bear the risk of your own performance, as a player wouldn’t, it’s going to affect the way that you play.”

“There would be obvious interest among the players—not just in basketball but in all sports—because they face injury risk, which is hard to insure,” Yermack says.

The NBA might still end up stopping Dinwiddie from selling these tokens, but if it doesn’t, this could become a trend in the sports world.