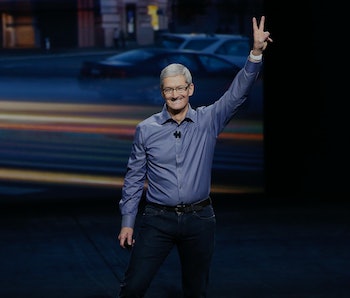 Apple’s announcement that it was getting into the news game alternately filled those who care about their journalism with a mix of dread and optimism.

While hosted content has become a full-blown tech trend (i.e. Facebook and Flipboard), Apple’s record of elegant design and the news it would hire red-blooded news editors who would go beyond standard sorting algorithms should have piqued the interest of even the most casual news readers. Today, Apple finally rolled out that News app with iOS 9. Here’s how it will change the way you read news on your iPhone:

From a design standpoint, Apple News offers what you’d expect from them: undeniably elegant and a little chilly.

Let’s get into the functionality:

You call up the app and select a list of publications from its early content partners, check the subject headings that interest you most, and the bare bones of your custom story feed are ready. I selected Vox, Vice, The New Yorker, and The Atlantic,* so small wonder the feed was mostly recent stories from those publications. This has the immediate benefit of consolidating your news consumption in one, personalized aggregator is speed. It’s like having your very own unpaid intern in the digital newsroom of your phone. Rather than check five or six different sites and Twitter feeds on rotation, as news junkies are wont to do, users can just scroll through the Apple News feed. Each story comes up with a subject designation (Crime, Politics, etc.) so if I’m the mood to stick to that genre I can browse around with a clicK. The stories I save are available to read even when the phone isn’t connected. Within a few minutes of selecting stories on gangsters in pop culture, poverty issues in the Sudan, and a Nigerian architect, the feed had recommended six more stories.

Does It Work for Publishers?

The concern here has been that as latest software update allows user to block pop-up ads in Safari, publications could lose out on revenue, but now that I’ve used Apple News I’m not so sure that update matters. Because, regardless, why would I jump from site to site to see what’s out there in Safari if I can just thumb through it in the app? As long as publications are getting a cut of the ad revenue (publishers get 100 percent of the revenue on ads they sell themselves, 70 percent on the ads Apple sells for them) it’s unlikely they’ll be cheated. Especially when every single iPhone user who updates will have those publication’s stories being fed to them automatically as the app is installed. New Yorker, this is your U2 moment.

The other worry often raised is that this will give Apple the muscle to slant the news if it wants, but one more company competing with Facebook and Flipboard and everyone else is only going to mean more competition to have the best content with no consolidated power. And when you get down to it, this is not a new concern, going back to the heady days of used car classifieds and personal ads in the daily paper. I don’t remember any handwringing that the Hilton was going to start dictating content to USA Today, or that Starbucks had bought itself a seat on The New York Times’ editorial board.

What is missing from News is a human touch: When Apple announced it was hiring a news editor, the copy read it was seeking candidates to ensure “that important breaking news stories are surfaced quickly, and enterprise journalism is rewarded with high visibility.” There’s still time for Apple to present readers with publications they might not be familiar with and spread the wealth around, but that doesn’t appear to be happening yet. The majority of stories presented are from sources you may read already, free of any sense that a human curator was behind the scenes looking for the new and unappreciated.