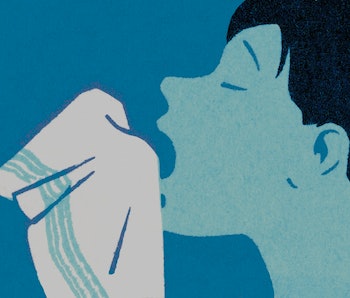 When the immune system detects an invader — peanuts, pollen, or another common allergen — it creates immunoglobulin E (IgE) antibodies that spur allergic reactions. Any allergy sufferer can tell you that these are unpleasant at best: They range from asthma to skin rashes, to full-blown anaphylaxis. But exactly where and how the body’s security bouncers, IgE antibodies, originate was a mystery.

Now, researchers have discovered their source: deep within human bones. It turns out, long-term exposure to allergens generates a “memory serum” stored in our bone marrow, flagging threatening allergens for the future.

The study was published this week in the journal Science Immunology.

What is “allergic memory?”

When the body senses it’s under attack from an allergen — even if the allergen may be harmless to others — it produces IgE antibodies that identify the allergen as harmful and prepare to take it down.

“It is unknown why some people develop allergies in the first place, but what is known is that some people have an aberrant response to the environment,” Jamie Orengo, study co-author and researcher at Regeneron, tells Inverse.

When this defense system triggers depends on an individuals’ genes and environmental influences. One person might guzzle oysters without any problem, while another person is left with an itchy mouth and worse the minute they bring an oyster to their lips.

Over the course of a lifetime, these IgE antibodies act as the body’s historians, remembering the offending allergens and tagging them for the future. But the cells that produce these antibodies are flighty, and up to this point, scientists haven’t been able to determine exactly where they come from.

“Because the cells that produce IgE are very scant and hard to detect, the source of this pathogenic IgE has remained elusive,” Orengo says.

Treatment complicates matters: The moment an allergic reaction is stopped in its tracks, the IgE antibodies disappear from view, making it difficult to locate them, the researchers say.

On the hunt for IgE

The researchers used mice to track down these sneaky IgE-producing plasma cells, the source of “allergic memory.”

The mice were exposed to allergens (dust mites) over four weeks. Over that time, their IgE antibodies seemed to come from secondary lymphoid organs, including the spleen. After the four week exposure period, the mice spent nine weeks without allergen exposure. By comparing the mice’s blood levels of IgE during and after the active exposure period, the researchers found that the level of IgE antibodies had significantly diminished during the rest period.

But when the team exposed the mice to dust mites over 15 weeks, the mice’s immune systems produced and stored IgE antibodies in their bone marrow, not the spleen. The accumulated IgE also developed the ability to induce anaphylaxis — the notoriously dangerous and life-threatening allergic reaction. For these mice, the rest period did little: The antibodies persisted at almost the same level in the bone marrow, likely cementing the “allergy memory”.

To test this theory, the scientists gave mice a six-month break without exposure to the dust mites. The four-week exposure group maintained the low level of IgE memory serum. The fifteen-week exposure group had a small initial drop after the allergen was removed, but levels of the IgE serum remained high in the bone marrow even after six months.

The discovery may explain how allergies evolve from an uncomfortable bodily inconvenience to a potentially fatal event. It also explains why people who have one bad allergic reaction, where lots of IgE would be produced and stored in the bone marrow, are screwed if they encounter the offending allergen in the future — even if it is more than a decade later.

To see if the same results hold true in humans, Orengo’s team tested five people allergic to things like cat hair and olive oil. As in the mice, they traced IgE production to their human participants’ bone marrow — creating a sort of “memory serum.” When the scientists removed the humans’ “memory serum” and injected it into mice, it induced severe allergic reactions, precursors to anaphylaxis.

"It is unknown why some people develop allergies in the first place."

Taken together, the findings suggest that if you can figure out a way to neutralize the memory serum, the body will forget its allergy — and the subsequent reaction attached to it should disappear as well. Future human clinical trials will be needed to confirm this possibility.

Allergies are experiencing an upsurge globally — some experts speculate that this is due to indoor and air pollution levels, as well as reduced biodiversity.

Orengo and her team’s new research could offer novel treatments to help these allergic individuals — many of whom are children — overcome them and improve their quality of life.

“This research could lead to new strategies for treatment of allergies, particularly by targeting relevant IgE-producing cells that seem resistant to current therapies,” Orengo says.

Immunoglobulin E (IgE) plays an important role in allergic diseases. Nevertheless, the source of IgE serological memory remains controversial. We reexamined the mechanism of serological memory in allergy using a dual reporter system to track IgE+ plasma cells in mice. Short-term allergen exposure resulted in the generation of IgE+ plasma cells that resided mainly in secondary lymphoid organs and produced IgE that was unable to degranulate mast cells. In contrast, chronic allergen exposure led to the generation of long-lived IgE+ plasma cells that were primarily derived from sequential class switching of IgG1, accumulated in the bone marrow, and produced IgE capable of inducing anaphylaxis. IgE+ plasma cells were found in the bone marrow of human allergic, but not nonallergic donors, and allergen-specific IgE produced by these cells was able to induce mast cell degranulation when transferred to mice. These data demonstrate that long-lived IgE+ bone marrow plasma cells arise during chronic allergen exposure and establish serological memory in both mice and humans.