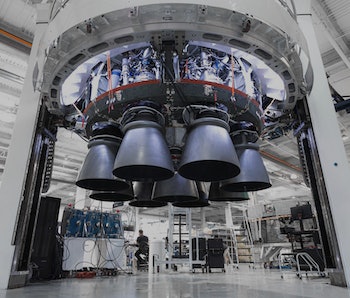 SpaceX is about to help upgrade the Global Positioning System, and it’s going to use a giant rocket to make it happen.

Elon Musk’s space-faring firm has taken images of the Falcon 9 booster set to power the GPS III SV-03 mission, scheduled for the end of the first quarter of 2020, which is set to send up the third satellite for the next-generation positioning system. The new system should prove more accurate, with better interoperability with other positioning constellations like Europe’s Galileo and China’s Beidou. Current systems are accurate to between 10 to 33 feet, and the new version should reduce that to three to 10 feet.

On Thursday, the Los Angeles Air Force Base in El Segundo, California, shared SpaceX’s images ahead of the big launch.

The Falcon 9 is the company’s history-making two-stage rocket, supporting almost all of its recent missions. In 2012 it supported the first commercial mission to the International Space Station. SpaceX has gradually perfected the rocket’s ability to safely land after launch, a breakthrough that can help bring the cost of rocket flight down. This will help fund the firm’s more ambitious projects like a city on Mars.

The nine Merlin engines, powered by liquid oxygen and rocket-grade kerosene, were on proud display in the images ahead of launch.

The upgrade program is expected to greatly increase the capabilities of GPS, which has been available to the world since the nineties. The new generation is expected to offer three times the accuracy of the current version, while offering eight times more power for military applications. For military cases, the new signal’s ability to better withstand jamming will also offer benefits.

The other benefit will be interoperability. The system is designed so that next-generation receivers can accept signals from any satellite. That means the user is more likely to receive a signal as it doesn’t depend on specifically tracking a GPS satellite.

The goal is to send up satellites over time, so that eventually the entire constellation will be GPS III satellites by 2034.

The mission, also known by the name “Columbus,” will be the third mission in the GPS II upgrade program. The first, SV-01 or “Vespucci,” successfully launched on December 23, 2018, from the Cape Canaveral Air Force Station in Florida using a SpaceX Falcon 9 rocket.

The second, SV-02 or “Magellan,” launched from the same station on August 22, 2019. This one, however, used a Delta 4 Medium rocket from United Launch Alliance, the final mission for that rocket.

These satellites are being manufactured by Lockheed Martin, which delivered in May 2019 the third satellite to the United States Air Force. Each satellite takes around 18 months to build.

The photos show the Falcon 9 at its home in Hawthorne, California. The booster is set to complete its static test firing at its facility in McGregor, Texas.

Ahead of the mission, the protective fairing that covers the satellite during launch has already been given its official insignia. This denotes the official GPS logo.

It’s not the first time SpaceX has assisted with a major tech upgrade. The company sent up its eighth and final Iridium mission in January 2019, completing one of history’s largest upgrades for a telecommunications constellation.