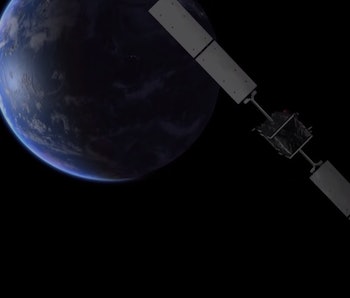 Two satellites constructed and launched by the European Space Agency will spend the next year testing Albert Einstein’s general theory of relativity, which was proposed in a paper the famed German physicist published 100 years ago this month (if you think of time that way).

In August 2014, the ESA launched the fifth and sixth satellites under its Galileo program, a global navigation satellite system that’s supposed to provide highly accurate civilian GPS for all of Europe. Unfortunately, Galileo 5 and 6 became stranded in elongated orbits around Earth due to faulty upper stage rocket burns, rendering them useless for navigation.

ESA scientists have been working ever since to correct the two satellites’ orbits through a complicated set of maneuvers. They haven’t succeeded, but failure can lead to its own sort of success. “The satellites have accidentally become extremely useful scientifically, as tools to test Einstein’s general theory of relativity by measuring more accurately than ever before the way that gravity affects the passing of time,” ESA Senior Satellite Navigator Advisor Javier Ventura-Traveset said in a statement.

Einstein’s theory of general relativity predicts that time passes slower close to massive objects. This has already been experimentally observed — most notably in 1976 by a probe fitted with a hydrogen maser atomic clock and launched 62000 miles into space.

The Galileo satellites — also fitted with hydrogen maser atomic clocks, still retain an elliptical orbit so far. Because they are climbing and falling about 5280 miles twice a day in altitude, they have become very valuable to researchers who want to compare how differently time travels at different altitudes from the Earth.

Atomic clocks run about a few tenths of a microsecond faster in orbit than they do on the ground. On navigation satellites, this produces errors of about 6.2 miles per day. The ESA is hoping to use a year’s worth of data from the two Galileo satellites to improve instrumental precision as well as understand general relativity in more detail. The two satellites are expected to collect data that’s at least four times more accurate than the results derived from the 1976 mission.

Scientists won’t be observing anything nearly as crazy as what was depicted on the planet Miller in the film Interstellar. Nevertheless, the new mission could give us some more information about what we might expect when humans finally do get to travel to other moons or planets that possess wildly different gravitational effects.