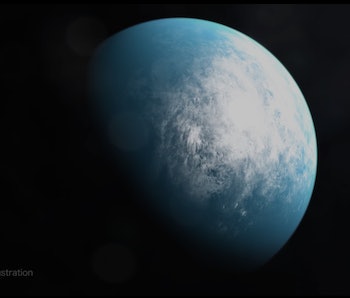 NASA’s TESS mission has discovered its first Earth-sized exoplanet orbiting within its host star’s habitable zone. And this intriguing planet is located right within our galactic neighborhood.

Dubbed TOI 700 d, the planet is around 20 percent larger than Earth and is located in its star’s habitable zone, which means that it could potentially support water on its surface — a key ingredient for life. Despite the boom in exoplanet discoveries over the last decade, very few of these kinds of planets have been found. The rare discovery brings astronomers closer to succeeding in their quest to find an exoplanet that may harbor life.

The new findings were announced this week during the 235th meeting of the American Astronomical Society on Monday in Honolulu.

The planet orbits a dwarf star, called TOI 700, which is located around 100 light years away in the constellation Dorado. The star is about 40 percent of the mass of our Sun and half of its surface temperature. Three planets orbit around the small star, including TOI 700 d, which completes a full orbit in 37 days.

The star was originally misclassified as being more similar to our Sun, which meant that scientists expected its planets to be much larger and hotter, ruling out the potential for habitability. But the team of researchers at TESS corrected the error and confirmed the finding using NASA’s Spitzer Space Telescope, which observed the planet as it transited in front of its host star.

“When we corrected the star’s parameters, the sizes of its planets dropped, and we realized the outermost one was about the size of Earth and in the habitable zone,” Emily Gilbert, a graduate student at the University of Chicago, who was involved in the discovery, said in a statement.

“Additionally, in 11 months of data we saw no flares from the star, which improves the chances TOI 700 d is habitable and makes it easier to model its atmospheric and surface conditions.”

TOI 700 d is the outermost planet in its planetary system, and the only one within its star’s habitable zone. Its small host star provides the planet with around 86 percent of the energy provided to Earth by the Sun.

All three planets may be tidally locked to their star, meaning that they would rotate once during their orbit. That means one side of the planet would be constantly facing the star. It may also mean that the cloud formation and wind patterns of TOI 700 d may be extremely different than those on Earth.

TESS has been on the hunt for habitable exoplanets since it launched in April, 2018. The survey satellite uses the transit method to look for planets, meaning that it measures the slight dimming of a star’s light that may be caused by a planet orbiting around it.

The recent uptick in the number of exoplanets discovered in the past 20 years is driven by astronomers’ desire to find a habitable world similar to our own, and perhaps answer the question of whether or not we are alone in the cosmos.

Astronomers are hoping to make future observations of the potentially habitable exoplanet to determine the characteristics of its atmosphere using the James Webb Space Telescope, which is scheduled to launch in the year 2021.