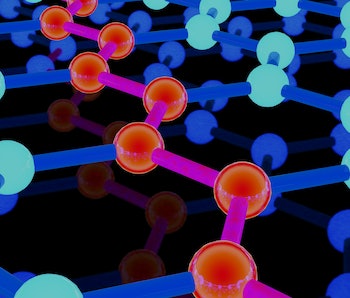 You know how the classic Beatles song goes: scientists make novel discoveries with a little help from their academically tangential friends. (Or something like that.)

In the case of a recent study, researchers from Columbia University and the University of California, San Diego were able to re-purpose techniques from astrophysics to better visualize nano-scale materials instead of galactic scale astronomical phenomena.

The method in question is called multi-messenger and works by combining information from multiple observational sources to get a better look at one particular object of interest. This method has made big waves in recent years by successfully allowing scientists to trace black hole mergers across the sky using detections of gravitational waves as well as light. This method gave astronomers a more robust way to study these phenomena and one that was larger than the sum of its parts.

So why not apply that success to the nano-scale, thought researchers of a recent study published this December in the journal Nature Materials. But this time, instead of focusing on massive, intergalactic events, researchers focused on the light-induced phase shifts of 26-nanometer-thick films of La^^2/3 Ca^^1/3 MnO3 (chosen for their potential response to magnetism and strain.) While nano-probing of materials is not new unto itself, what made this study unique was that it used both optical scanning as well as magnetic nano-imaging to better study the phase transitions of these materials.

Dmitri Basov, a co-author of the study and Higgins Professor of Physics and Director of the Energy Frontier Research Center at Columbia, said in a statement that this kind of approach was previously believed to be impossible.

“We have brought a technique from the inter-galactic scale down to the realm of the ultra-small,” said Basov. “Equipped with multi-modal nanoscience tools we can now routinely go places no one thought would be possible as recently as five years ago.”

By applying these different imaging methods the team was able to study how these materials react to strain (like pulses of light) and were able to observe and manipulate resulting electrical, magnetic and optical shifts at the nano-scale. The authors write in the study that this kind of manipulation and observation wasn’t possible before using only “conventional bulk probes.”

The study’s first author and postdoctoral researcher at Columbia Nano Initiative, Alexander Swinton McLeod, said in a statement that the hidden properties unearthed with this method will have a great impact going forward on the study of quantum materials and superconductors.

“It is relatively common to study these nano-phase materials with scanning probes,” said McLeod. “But this is the first time an optical nano-probe has been combined with simultaneous magnetic nano-imaging, and all at the very low temperatures where quantum materials show their merits. Now, investigation of quantum materials by multi-modal nanoscience offers a means to close the loop on programs to engineer them.”

While this initial process didn’t focus much on superconductors themselves, the authors write in their study that these methods can be easily applied to superconductors and superconducting materials as well. Better development and studying of these materials will help enable computing at the super-low temperatures required by quantum mechanics.

More like this
Innovation
5.8.2022 12:30 PM
How the new Large Hadron Collider experiments could change physics forever
By Sarah Wells
Entertainment
5.3.2022 5:00 PM
Science and superheroes invented the multiverse by mistake — they’re still fighting over it today
By Eric Francisco
Science
5.14.2022 7:00 PM
Why scientists think physics could be in for a reckoning
By Roger Jones and The Conversation
Related Tags
Share: